One of the main concerns brought up in mask mandates across Idaho is the burden that a mask mandate would put on law enforcement. At least one of Idaho’s county sheriffs in the Panhandle Health District is speaking out against the mask mandate.

Bonner County Sheriff Daryl Wheeler says that they will not enforce the mask mandate in his county but he can’t speak for local police agencies and whether they will or won’t.

Wheeler made his announcement on Facebook by saying the following,

The Bonner County Sheriff’s Office will not be enforcing the mask mandate passed by the Panhandle Regional Health District.

When Bonner County Dispatch receives a complaint of a suspected violation of the mask mandate from a citizen, the complainant will be advised that the Sheriff’s Office will not be investigating or enforcing the mask mandate. Dispatch will close out the call and make a record of it. If the caller insists on speaking to a deputy, the deputy will call him/her back and state the same thing.

The three Police Departments in the county – Ponderay PD, Priest River PD and Sandpoint PD (who also provides services in the City of Kootenai) – will have to make their own decisions regarding if and how they will enforce the mask mandate. Bonner County Dispatch will forward the call to the Police Departments, and they are on their own to take it from there.

The Bonner County Sheriff’s Office is working at maximum capacity on real crime, and it cannot enforce the unenforceable mask rules. Most law enforcement agencies around the country are either passively or actively refusing to follow these types of directives. Any arrests/citations that have been made/issued in the past were related to high-profile targets (such as the Psalm Sing in Moscow, Idaho), and I believe they have nothing to do with public health.

On the Bonner County Sheriff Facebook page, many of the comments Idaho Dispatch read were in support of Sheriff Wheeler’s statement.

Here are a few examples: 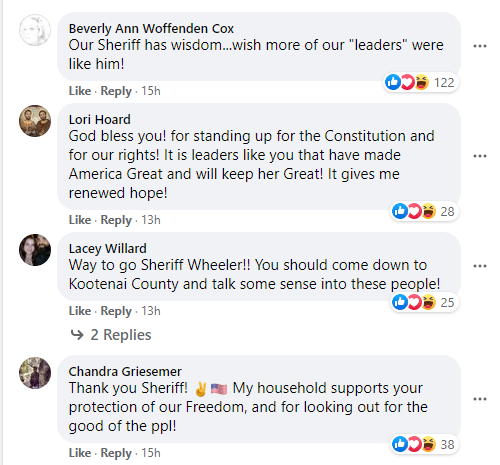 However, not everyone agreed wtih Sheriff Wheeler’s stance. Some of the comments Idaho Dispatch read were from citizens frustrated Wheeler was refusing to enforce the mask mandate.

Here are a few examples of those:

Do you support Sheriff Wheeler’s refusal to enforce the mask mandate or do you believe he should enforce it?