Recently, an Idaho newspaper came under scrutiny for a cartoon that they shared.

The Lewiston tribune is a local newspaper up in the Lewiston area. The cartoon they shared was from the Atlanta Journal-Constitution.

It was posted in the “Opinion” section of Lewiston’s paper.

Upon publication, the paper admits they received a large amount of backlash and issued an apology two days later.

What caused the controversy?

A cartoon with a black student and a white student were doing an “active shooter drill” and the black student says that it feels like waiting for the police to show up. 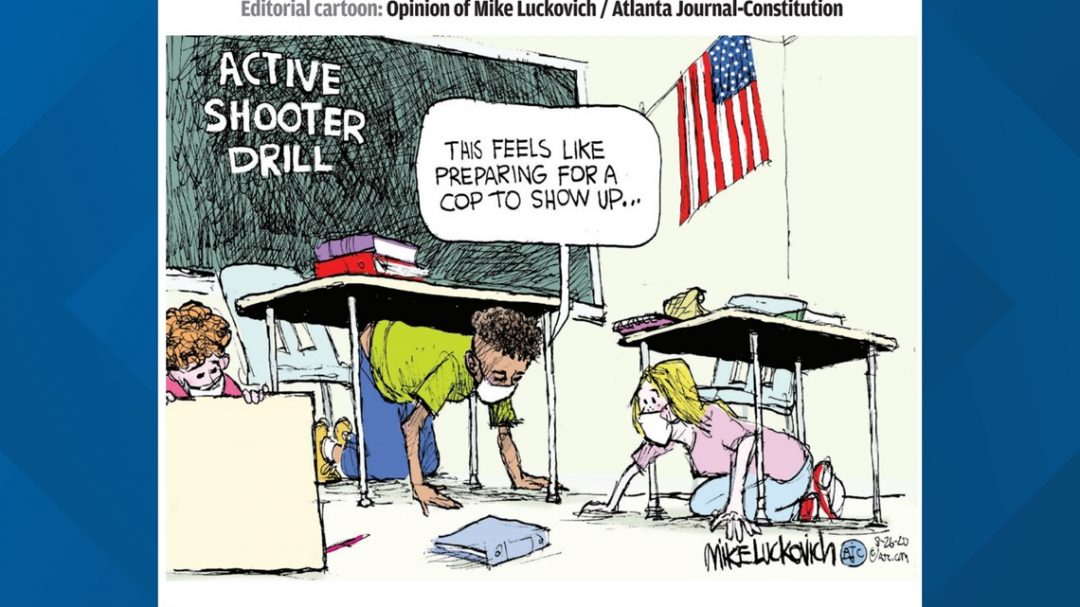 The Lewiston Tribune says that the article caused major problems for them. Nathan Alford who is editor and publisher with the Tribune said in an editorial two days after the release,

The consensus: The Tribune doesn’t support local law enforcement. It was also a put-down on our teachers who lead our kids — including three of my own — in regular active shooting drills in our schools. Not to mention the first responders.

As the country finds itself embroiled in controversy over policing practices, the cartoon did not appear to go over well to the Lewiston Tribune readers.

Alford goes on to say,

And to infer any wrongdoing on the part of our region’s officers and deputies solely by the actions of others in cities like Kenosha, Wis., or Minneapolis, Minn., is unfair and unjust.

Let’s not overlook the fact we’re all innocent — including police officers — until proven guilty. There are facts and circumstances that cannot be seen on the videos captured by officers or bystanders.

This apology is for all — you, your family and neighbors — subscribers, or not.

We have reached out to Representatives Von Ehlinger and Kingsley for comment on the controversy. Here is what Rep. Von Ehlinger sent Idaho Dispatch as a reaction to the cartoon,

The Lewiston Morning Tribune has been a left-wing anti-American “news” publication for decades and decades. I am not surprised to see this cartoon make it past the editor’s desk. It is just another example of the irresponsible and lazy reporting that many of us in the community have come to expect from the Lewiston Morning Tribune. It reminds me of a university newspaper, where you have all sorts of young Marxists trying to make a name for themselves by being as radical as possible. Real local news many would be interested in is ignored by the tribune in favor of left-wing reporting and editorials from far out of the region that targets a demographic that doesn’t even exist in our area. It is ridiculous, and I hope they come to see the error of their ways, though that would be quite doubtful.

One thought on “Idaho Newspaper Apologizes for Controversial Cartoon”