Rep. Priscilla Giddings (R-7) has been censured and removed from her spot on the House Commerce and Human Resources Committee today by a vote of 49 to 19.

Back in April, the House Ethics Committee made the recommendations against Giddings because of a news article she shared which contained the name and photo of an alleged rape victim. However, the issue of whether the House would agree with their recommendations did not come up until today during the Special Legislative Session.

Gidding would have lost her seat on the House Commerce and Human Resouces Committee.

As Scott attempted to talk about how the committee was financed, she was interrupted several times that her questions and comments were out of order.

Rep. Ron Nate (R-34) also asked for a point of order and asked if it was appropriate for Bedke to be controlling debate since he is one of the signers on the complaint against Giddings. The crowd in the gallery began clapping, and Bedke asked the crowd to follow the gallery’s rules, which do not allow audible noises.

Bedke then told Nate that he was the Speaker, and until he was no longer Speaker, he would be there.

As Scott tried to discuss details about Giddings’ life, she was interrupted by Rep. Greg Chaney (R-10), who said that Scott’s debate was not germane to the issue at hand. Bedke noted Chaney’s point of order and told Scott to tighten up her debate.

Before Scott continued, however, Nate asked for a point of order again. He asked Bedke if it was appropriate for him to be controlling debate since he is a political opponent of Giddings. Bedke told Nate that he was the Speaker and that it was just a fact of life right now.

Scott closed her debate by discussing the medals and awards that Giddings has had during her military career.

After Scott was done, Nate stood up to debate. He started his debate by telling the legislative body that the House Ethics process is broken.

Nate, in his debate, also discussed the sharing of the original news article, which contained the name of an alleged rape victim and that alleged victim’s name. In their debate, both Nate and Scott asked whether sharing a news link was a reason to punish a Representative.

Rep. Gary Marshall (R-30) stood to debate in favor of the report. Rep. James Ruchti (D-29) also favored the report and said that Giddings should be punished for doxing an alleged rape victim. However, Ruchti was interrupted by Scott, and Scott said that Giddings didn’t dox anyone.

After most of the Representatives who wanted to debate had spoken, Giddings herself stood up and debated against the motion. Giddings attacked the report and said she was not given due process.

Giddings told the body that removing her from one of her committees wouldn’t hurt her but the 45,000 people she represents.

Ultimately the House voted in favor of censuring Giddings and removing her from her spot on the House Commerce and Human Resources Committee. You can see a screenshot of the vote below. 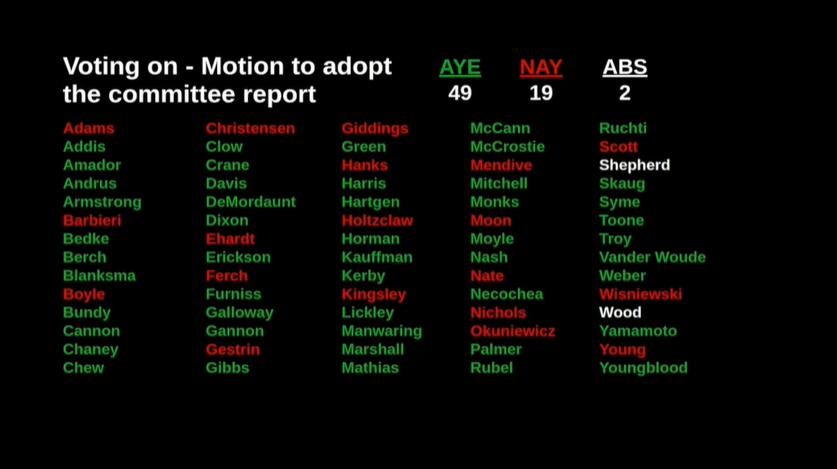