Several weeks ago, before the Idaho legislature went into recess, an incident occurred on the Idaho House floor.

Two high school students were on the House floor handing out masks to legislators. At one point, the students stopped and took a picture of Rep. Priscilla Giddings (R-White Bird) and Rep. Tammy Nichols (R-Middleton).

Additionally, Giddings said that citizens on the House floor are escorted by a legislator and no legislator was present with the students.

Last week, Giddings was sent an email by capitol security who admitted that a mistake had been made on their end and that the security guard had made assumptions he should not have made.

Here is the portion of the email regarding the security concern brought forward by Giddings:

I wanted to follow up with you concerning the complaint on Officer B. Aggson and his lack of attention to detail, which led to two individuals accessing the floor, taking photos of you and Representative Tammy Nichols and then subsequently posting them on social media.  I have concluded my investigation and determined Officer Aggson did not follow procedure and was negligent in his duties.  He admitted to “assuming” during this incident and should have taken action before allowing the two individuals through [to] the floor.  I very much apologize for this incident and have provided Aggson counseling, training and a written record of his shortcomings.   In addition, I have replaced Aggson’s position with Officer Adam Mirjanian and switched some other positions to better fit the needs for the remainder of the 2021 Session.   Moreover, I have added Officer Dwight Penkey to assist the House door-keeper.  Penkey is by far one of our best officers and he will ensure no one is allowed to enter the floor.

The students later on that day posted several images to Instagram. The students are allegedly part of a group called “Extinction Rebellion Youth- Boise,” an environmental group fighting for what their website describes as “climate justice.”

Two of the pictures the students post on their Instagram are with Rep. Lauren Necochea (D-Boise) and Sen. Grant Burgoyne (D-Boise). (Story continues below.)

Idaho Dispatch reached out to ask XR Youth Boise if a legislator had told them they could go on the House floor at the time they did. We have not yet received an answer from them.

Here is the image that was posted of Giddings and Nichols on the XR Youth Boise Instagram: 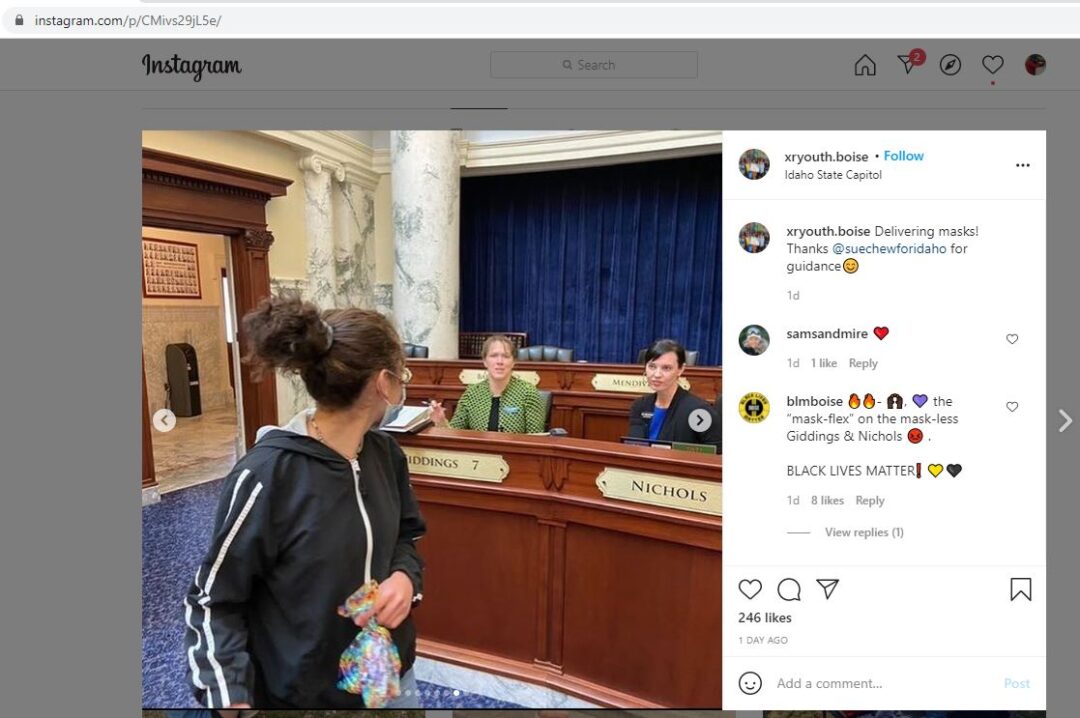 In this post, the group thanks Chew for guidance but there is no indication on if it was just guidance for being in the capitol in general or guidance on entering the House floor or another meaning.

In the email from capitol security, they indicate that they moved personnel around and ensured Giddings that security would do better going forward.

Be sure to subscribe to Idaho Dispatch today to support our efforts to bring you the news without all the bias and news where both sides are given an equal opportunity to speak out about an issue. Simply go to idahodispatch.com/subscribe today!