Shiva Rajbhandari was the event organizer and is a junior at Boise High School. Rajbhandari told Idaho Dispatch that Idaho has the weakest climate change science standards in the country in K-12 schooling.

According to Rajbhandari, approximately 250 people attended the event, and that group did not encounter any counter-protesters. Rajbhandari also said that students signed up to “get involved” from local high schools, including Boise, Borah, Capital Eagle, Meridian, and Timberline.

Rajbhandari sent Idaho Dispatch an email with a description of the event:

In addition, in the email to Idaho Dispatch, Rajbhandari provided a link to an Instagram video of the speeches from the event.

In Rajbhandari’s speech, he told attendees in part,

We’re here today because the people who work in that building are prioritizing politics over our future. Idaho has the weakest K-12 climate science standards in the country. Every year, the legislature uses climate science as political football, undermining the life’s work of educators and scientists, and doing so at the expense of our education and our future.

Rajbhandari criticized the Idaho Freedom Foundation in particular and agreed with an attendee that he “hates” the organization.

Here is part of what Rajbhandari said about the IFF:

This group has many of Idaho’s elected leaders bought and paid for and is funneling conspiracy theories about science to support the big money interests of, guess who? Guess. Fossil fuel executives, from out of state!

Rajbhandari went on to say,

The Idaho Freedom Foundation rules by fear and the Idaho legislature is truly scared. Scared of the Foundation taking away their campaign contributions, or running challengers against them. But we aren’t scared, are we? We can speak truth to money.

This year, IFF has invested in projects to show how the government school system fails and indoctrinates students. Perhaps we wasted our money, because these students showed up and made the exact same case for free. Clearly, these kids are simply parroting lies fed to them by their liberal teachers. Our education system is broken and Idaho’s elected officials would be wise to fix it so this type of left-wing indoctrination stops.

We should note that these kids have few, if any, facts on their side. The Idaho Freedom Foundation does not endorse candidates, nor does it contribute to candidates for public office. Instead, IFF focuses on developing freedom-first policy solutions to make Idaho an even better place to raise a family, start a business, and pursue one’s life calling. Instead of attending left-wing rallies, these kids should spend their time learning how to conduct effective, honest research. It’s clear they sorely lack in that area.

Rajbhandari also heavily criticized Governor Brad Little, saying that he was “all talk and no action.” He also criticized Little for not standing up to the Idaho Freedom Foundation.

Idaho Dispatch reached out to Little’s office for a response, but we have not received one at this time.

For the remainder of Rajbhandari’s speech, he mentions various reasons why climate change science must be taught in schools. He ties forest fires, temperature increases, heat waves, and more to climate change.

A BSU freshman and Coeur d’Alene High graduate, Amanda Thompson also spoke at the event. She mainly spoke of the need for more snow and more action by Idaho’s elected officials to fight climate change.

The final scheduled speaker for the event was Halley Hoellwarth, a student at Eagle High School and Miss Teen Idaho Earth. Hoellwarth said she mostly learned about climate change from the news and from a book written by Greta Thunberg. She said that students in many areas of the education system need to know more about climate change so that they can make necessary changes in the workforce and that in northern Idaho areas students are learning about climate science.

In closing, Hoellwarth encouraged attendees to vote in the Republican Primary taking place in May of 2022.

After the speeches were concluded, event attendees put sticky notes on the doorway of Little’s office on why they wanted climate science as part of K-12 education and left a petition to the governor with his office.

Below are a few of the images sent to Idaho Dispatch from the event: 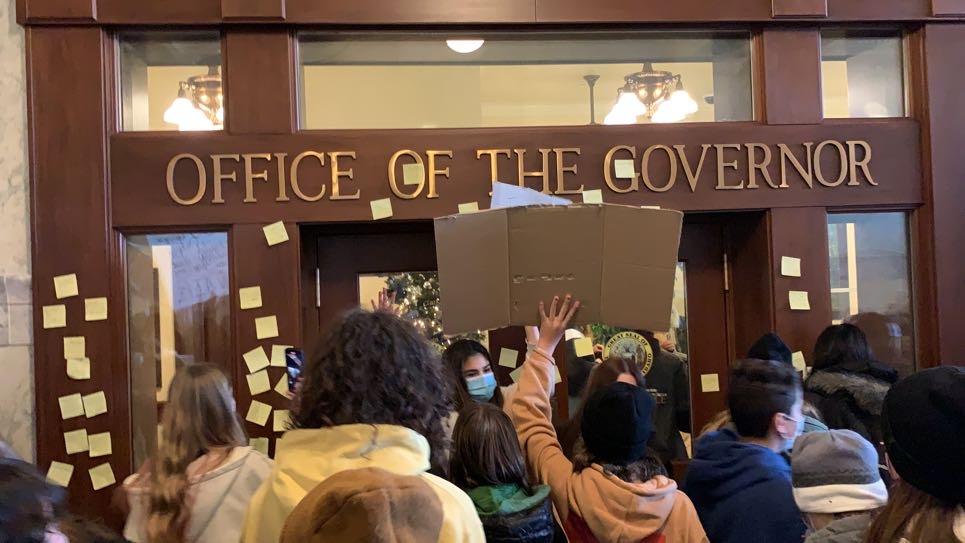 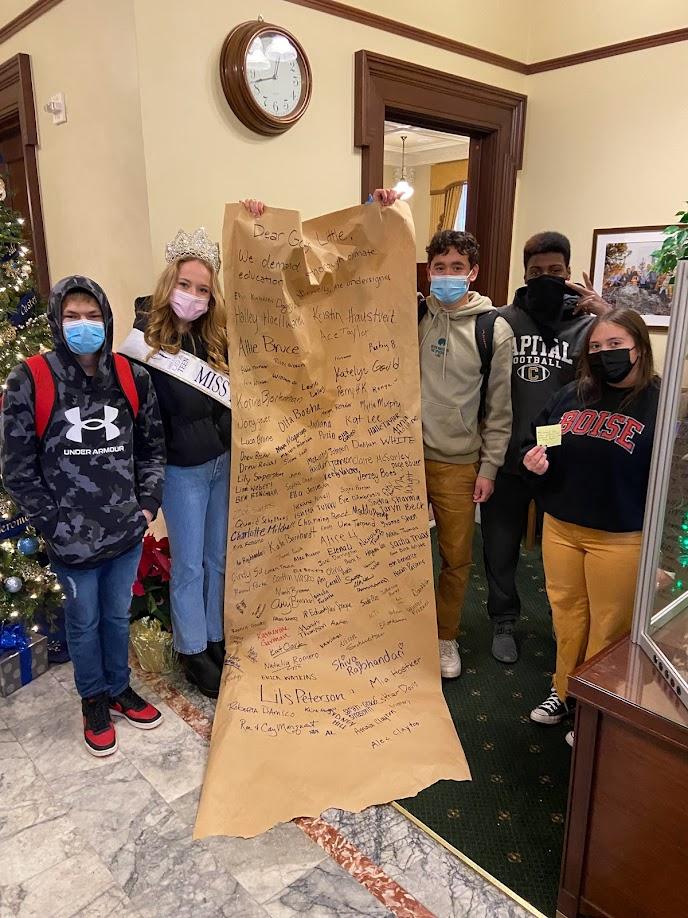