Gun control has been a major topic of discussion this year with President Joe Biden signing several Executive Orders on the topic. Additionally, Biden is asking congress to pass additional firearm restrictions.

SB 1205 has now passed the Idaho House and is headed to Governor Brad Little’s desk.

This is the “Statement of Purpose” for the bill:

The Idaho Firearm and Firearm Accessories and Components Protection Act builds upon, without resetting, the action taken by the Idaho legislature in 2014 under the Idaho Federal Firearms, Magazine, and Register Ban Enforcement Act codified in Idaho Code Section 18-3315B which prohibitslocal officialsfrom being ordered to enforce federal actions contrary to the Idaho Constitution.

This bill seeks to protect the rights of Idaho citizens under Section 11, Article 1 of the Idaho Constitution regarding new federal executive orders and other actions by prohibiting Idaho government entities from enforcing or supporting the enforcement of these new federal actions regarding firearms and firearm accessories and components that violate the Idaho Constitution.

Rep. Judy Boyle (R-Midvale) was the floor sponsor in the House and opened debate on the bill after briefly explaining what the bill did.

However, only one legislator debated the bill. Rep. John Gannon (D-Boise) said one of his concerns was some law enforcement officials may be hesitant to take action in some cases under the new law.

No other legislators stood and debate for or against SB 1205.

In the end, the bill passed the Idaho House on a party-line vote of 55-11. Below is a screenshot of how each legislator voted: 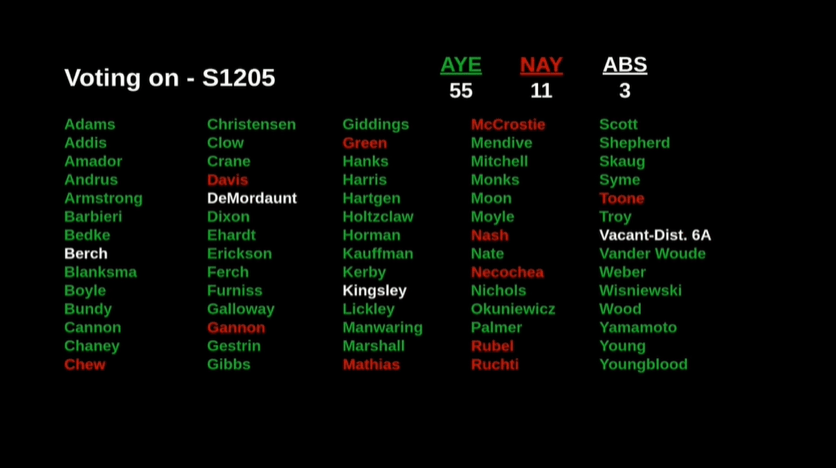