The battle over Reclaim Idaho’s ballot initiative effort moves on.

Yesterday, the 9th Circuit Court of Appeals denied the state of Idaho’s request to block the initiative effort.

This after a federal judge in Idaho told the state they must allow Reclaim to gather signatures electronically or put the initiative on the ballot in November even though enough signatures have not been gathered. The state refused to accept either of these options and appealed to the 9th Circuit to put a stay on the judge’s order.

After the 9th Circuit denied Idaho’s appeal, Gov. Little said he will appeal to the U.S. Supreme Court.

He said in a statement,

We intend to appeal this decision and to seek a stay from the U.S. Supreme Court.  We will continue our efforts to preserve the integrity of Idaho’s duly enacted laws and to prevent the disruption to our upcoming elections that this decision will cause.

It is unclear how the U.S. Supreme Court will deal with the issue.

Recently, the Colorado Supreme Court struck down an effort by Gov. Pollis who tried to allow signature gathering to be done by email and mail.

In the ruling, Colorado’s highest court said there were requirements in their state constitution that could not be overturned by the Governor’s order. This may be a similar argument the state makes before the U.S. Supreme court.

Idaho’s law requires that signatures be gathered in person.

Opponents of Reclaim Idaho’s electronic signature-gathering efforts have said it is a violation of the law to gather them electronically.

Idaho’s laws require that signatures for ballot initiatives be gathered in person. Additionally, a certain number of signatures are required by law. Judge Winmill’s order to let Reclaim gather signatures electronically or simply put the issue on the ballot without the required signatures are both a violation of our laws. Judges must stop legislating from the bench. Even if you agree that Gov. Little violated the constitution, you don’t fix a wrong with another wrong. Hopefully, the U.S. Supreme Court does the right thing and strikes down the lower court’s opinions on this issue. 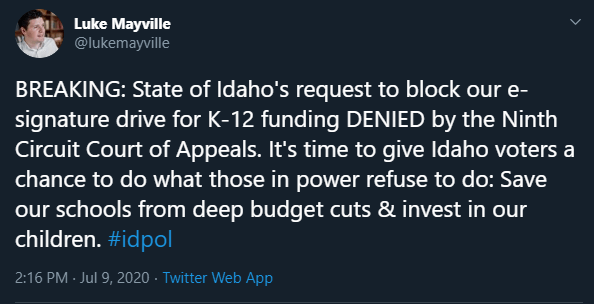 The group argues that Gov. Little scuttled their ability to gather signatures when he issued the stay-at-home order back in March. The group had already stopped gathering signatures before the order was issued.

Reclaim also argues that the order made their initiative effort impossible and that Gov. Little had to give them a safe way to gather signatures.

The ballot initiative they are working on will raise approximately $170 million in funds through tax increases. One tax increase will be for individuals making $250,000 or more ($500,000 or more for a couple) and another tax increase on corporations.

Do you think the U.S. Supreme Court will strike down the lower court decisions or will Reclaim prevail once again?

Let us know in the comments!