The bill is one of the largest income tax cuts in Idaho history. HB 380 provides $163 million in ongoing tax relief and one-time tax relief of $220 million.

Idaho lawmakers passed the bill almost entirely along party lines, with Sen. Dan Johnson (R-Lewiston) being the lone Republican in either chamber to vote with all Democrats voting against the bill.

Little said as part of his Press Release on the bill,

I appreciate my partners in the Legislature for sharing my commitment to tax relief for our citizens. In Idaho, we’re able to achieve historic tax relief because we responsibly manage our budgets. The strength of our economy proves fiscal conservatism works.

Now that the bill has been signed into law, citizens are reacting to the bill’s passage.

Idahoans on social media reacted to the news, with some saying it is much-needed relief and others saying it will only benefit the rich. Other Idahoans say that it doesn’t do enough and that Little is only doing it for political gain.

Here are some screenshots of some of the comments on the Idaho Dispatch Facebook page when we asked how they felt about the bill: 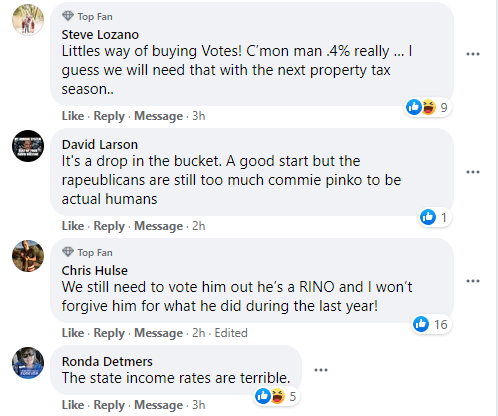 Twitter users also appeared to be displeased with the passage of HB 380. Here are some of the comments from Little’s Twitter feed: 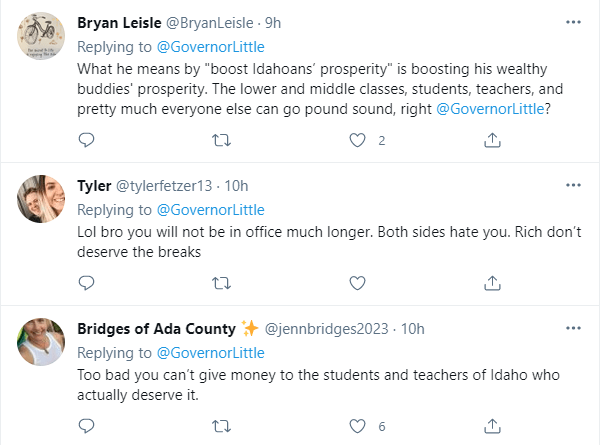 On Little’s Facebook page, many commenters also appeared displeased with HB 380 and felt that the legislature should have look at removing the grocery tax or decreasing the sales tax.

However, there were some comments supportive of Little signing HB 380. Here is one screenshot of some of the comments from Little’s Facebook page: 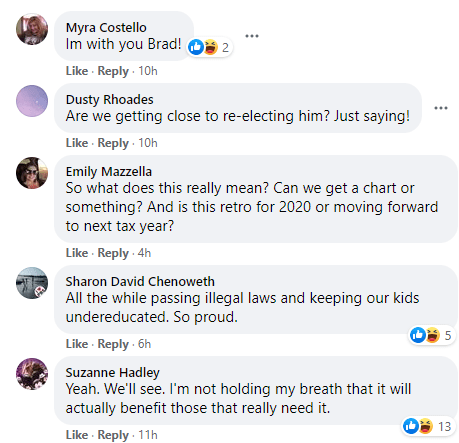 HB 380 was sponsored by Sen. Steve Vick (R-Dalton Gardens) in the Senate and Rep. Steve Harris (R-Meridian) in the House. Idaho Dispatch reached out to both of them for comment but they have not yet responded to our inquiry.

Here is the “Statement of Purpose” for the bill as listed on the legislative website:

This 2021 Tax Relief bill reduces all income tax brackets, reduces the number of brackets to 5, and sets the top individual and corporate tax bracket to 6.5% retroactive to January 1, 2021. This provides Idahoans with $162.9 million in ongoing tax relief. This bill also provides a one-time sales tax/income tax rebate, returning $220 million to Idaho taxpayers. A rebate check will be sent to 2020 personal income tax filers providing a minimum amount of $50 for each taxpayer and dependent or 9% of income taxes paid in 2019 whichever is greater.

Rep. Ron Nate (R-Rexburg) told Idaho Dispatch about the passage of the bill:

The income tax cut is the largest tax cut in Idaho history. It is still not enough though. Idaho should not be one of only five states to fully tax groceries.

We will work hard to provide even more tax relief for Idaho families in the next legislative session.

Idaho Dispatch also reached out to Rep. Lauren Necochea (D-Boise), Rep. Chris Mathias (D-Boise) who deferred the question to Necochea, Rep. Brooke Green (D-Boise), and Rep. John Gannon (D-Boise) for comment but have not received a response at this time.

Do you believe this tax relief bill is enough or should more be done? Or does Idaho need to use the tax money for something else?