Idaho usually does not see much in the way of presidential campaign stops for the general election.

Additionally, Idaho only accounts for four electoral votes which is significantly lower than swing states such as Ohio (18), Pennsylvania (20), and Florida (29).

Tomorrow though, Donald Trump Jr. will stop in Idaho on behalf of his father’s presidential campaign for a fundraiser in Stanley, Idaho.

A number of citizens are organizing a “Welcome Party” for Trump Jr. at the Smiley Creek airport in Kethum. You can find the event link on Facebook for that event here.

For those wishing to attend the fundraiser, you will need at least $2,800 per person for the dinner. Other options for the event range from $5,600 all the way up to $250,000 for various sponsorships.

Generally speaking, when presidential candidates or high profile members of their campaign team fly in for fundraisers, they are only there to do a fundraiser and not to give public speeches.

If a public speech is announced we will update the article accordingly.

While President Trump is not coming to Idaho himself, did give Idaho a “shout out” recently on Twitter by posting this image: 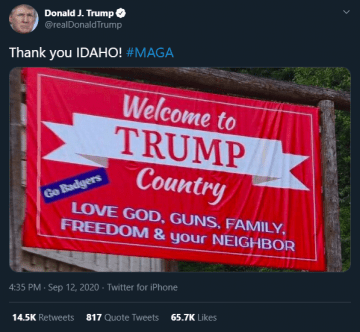 Will you be going to welcome Donald Trump Jr. at the airport or attending the fundraiser in Stanley? Would you like to see presidential candidates visit Idaho in-person?