Idaho Dispatch recently obtained a document that shows the Boise Police Department is not polygraphing all of their newly hired officers.

The document (shown at the end of this article) Idaho Dispatch obtained has the hiring “class” for Boise P.D. and how many of the new entry-level hires, how many were lateral transfers, and how many of those hires had a pre-employment polygraph screening.

The following is a breakdown of the numbers on the document:

The document also contains an explanation from the Boise P.D. on the change. It says,

Please see the information below regarding our polygraphs. We used to polygraph each candidate before backgrounds, but we found results were not consistent and moved to a case-by-case basis.

Over the last couple of days, Idaho Dispatch reached out to the largest police departments in the state of Idaho, by the population of their respective city, to determine if their departments were using polygraphs and which new hires were polygraphed.

Out of the nine cities Idaho Dispatch reached out to, seven cities responded to our request for information about their hiring process. Idaho Dispatch has not yet heard back from the police departments in Lewiston and Pocatello, but several retired officers have told us that both agencies do polygraph all new hires.

Idaho Dispatch’s primary question for each of the police departments was which new hires were polygraphed.

According to all seven agencies we spoke with, every newly hired officer goes through a polygraph examination. If the officer is an entry-level officer or someone transferred from another agency, every police department Idaho Dispatch spoke with said all new hires are polygraphed.

Idaho Dispatch contacted the Boise P.D.’s Public affairs office about the document to ask if the agency is still doing polygraphs on a case-by-case basis, but we have not yet received a response.

The first question Idaho Dispatch asked McMahon was, “What role does the polygraph play in the background investigation process?” McMahon told Idaho Dispatch,

A polygraph examination is a valuable tool when used in conjunction with a thorough investigation. It’s just one of many methods used by a capable investigator. Police agencies, security companies, banks, and other high trust organizations, including the US government and military use this tool in internal inquiries, hiring decisions, and to validate someone believes they are telling the truth. Persons with access to highly classified materials are often polygraphed as often as every six months. The main reason for administering a polygraph test is to assure that the data provided by the candidate is true or authentic. It is a test to confirm the honesty of an applicant. In some circumstances, it can confirm information obtained during the background investigation independent of the applicant’s disclosures. Its use in hiring is a standard according to the International Association of Chiefs of Police.

Idaho Dispatch then asked McMahon, “Were all of your new hires polygraphed, whether they were out of an academy or were transferring in from another agency?” Here is what McMahon told us,

As a matter of policy and practice, our agency polygraphed all candidates being considered for appointment as sworn officers during the background process. This process included current service officers from other agencies, persons applying from out of state, persons with or without prior law enforcement experience, even persons who had worked for our agency previously and were seeking to return after employment with other agencies elsewhere.

First, I know of no agency that disqualifies anyone exclusively on the basis of a polygraph exam. It is instead the information disclosed during the process which is of importance in making the decision as to the suitability of a candidate. The questions to the candidate are reviewed with them before any test is administered. This assures the person knows and understands the questions. For example, if the adult candidate discloses the theft of a pencil at age six which still bothers him/her the question could be altered to as “Other than the theft of a pencil at age six that you told me about have you stolen anything of value since you were age ____?” The polygraph machine merely records autonomic responses by an individual to questions. Changes in blood pressure, galvanic response, breathing frequency or volumes, heartbeat, changes in pupil size, or vasoconstriction in vocal responses have all been used to determine if someone is “telling the truth”.

That being said, a good polygrapher is a skilled interviewer. Thus, if the polygraph machine shows the candidate had an increase in blood pressure, galvanic response, and a break in breathing pattern when asked the question “Have you ever falsified information in a police report?” the technician might ask “I noticed you seemed to have some difficulty with question XX, can you tell me what you were thinking about when you answered that?” I had a candidate tell the interviewer he had been thinking of a recent trial when a defense attorney had accused him of putting false information in a report. His own agency had investigated the allegation, determined it was not true, but he was very angry still three years later because his religious beliefs held him to a high standard of always telling the truth. Here the polygraph device indicated the candidate felt strongly about the issue. It showed he was responsive to the question and the examiner could discern he was telling the truth.

I have had candidates whose disclosures about driving while intoxicated, domestic violence against a live-in partner or spouse, theft of goods or services, use of narcotics, sexual misconduct, or improper police actions did preclude them from employment. While many of these came from persons who had never been police officers some were disclosed by current service or prior officers. In each case, these facts were not known to their current agency or leadership.

Idaho Dispatch also asked McMahon about polygraphs in general by asking, “Polygraphs are not admissible in court but are still used by many law enforcement agencies. Many people say they can be beaten. In your experience, who can beat a polygraph, and did you ever have anyone that was able to do so that you are aware of?”

Polygraph examinations and results are not admissible in US Courts based on analysis of facts in cases such as Frye and others, however, admissions or statements made during the administration of the tests may be allowed as an exception to the hearsay rule. There is a belief that persons skilled in lying or controlling their breathing etc. can “beat” the device. Hollywood makes this seem plausible, however, a skilled polygraph examiner can see the efforts to do this and advise the person that these efforts are more consistent with deception. Likewise, the use of certain medications to lower blood pressure etc. also affects the device’s readings and again is a clear flag to the examiner of attempts at deception. Attempts to deceive the device are pretty easy to spot and I don’t personally know anyone who has done so successfully.

Finally, Idaho Dispatch asked McMahon, “What potential problem might occur if a law enforcement agency were to pick and choose which candidates were going to be polygraphed?”

The consistency of approach and application of investigation methods yields far better results when applied to all candidates. Assuming you “know” everything there is to know about a candidate because they served under you elsewhere and waiving parts of the investigation may unnecessarily blind the decision-maker in key areas.

The pre-employment background investigation for law enforcement positions is uncomfortable for the candidate. It should be. We are entrusting deadly force choices, expectations of a high degree of service above self, and vesting a great deal of independent decision-making authority in each person that wears a badge and carries a gun on our behalf. As a citizen of this Treasure Valley community, I want the appointing authority to have all the information available to assist him or her in making the correct choice in selecting those who will protect us. I have been privileged to have met and worked with officers here in Idaho and they have been exceptional. It’s my belief that successfully completing the background process, including the polygraph is a right of passage and an assurance to each of us who stand for the public that we all met the same standard for admission to this select group of people who serve the public daily. It is a privilege we all hold dear.

McMahon told Idaho Dispatch that he has been a part of the polygraphing process for military, intelligence, the private sector, and police. He also was part of the screening process for entry-level officers up to the Chief of Police.

Idaho Dispatch is continuing its investigation into the polygraphing question about Boise P.D. and will keep citizens informed about any new information we receive. 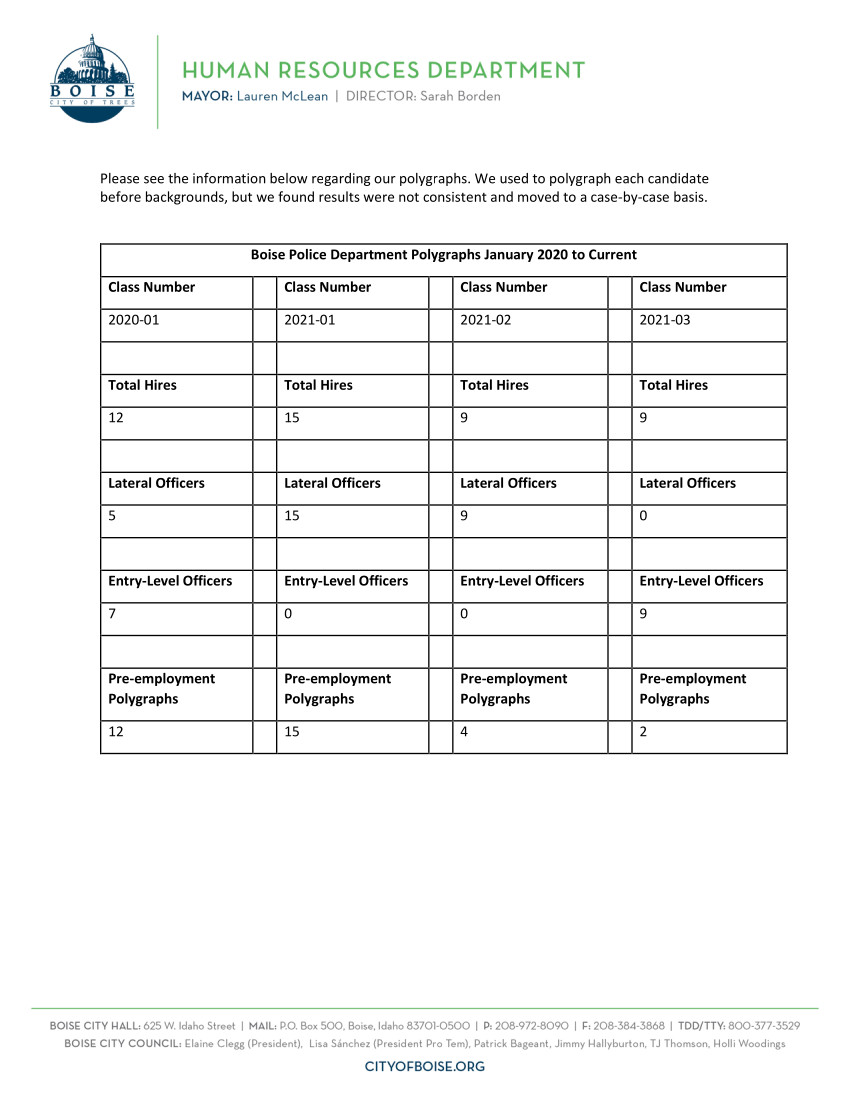