The nurse had a heart attack and at least one doctor with St. Lukes familiar with the nurse who passed away has said that the nurse died of a heart attack due to complications from the Coronavirus.

Rep. Tammy Nichols came under heavy scrutiny in the media for the post that she shared and now she is responding to that criticism.

We reached out to Rep. Nichols and asked her a number of questions to find out exactly what happened. 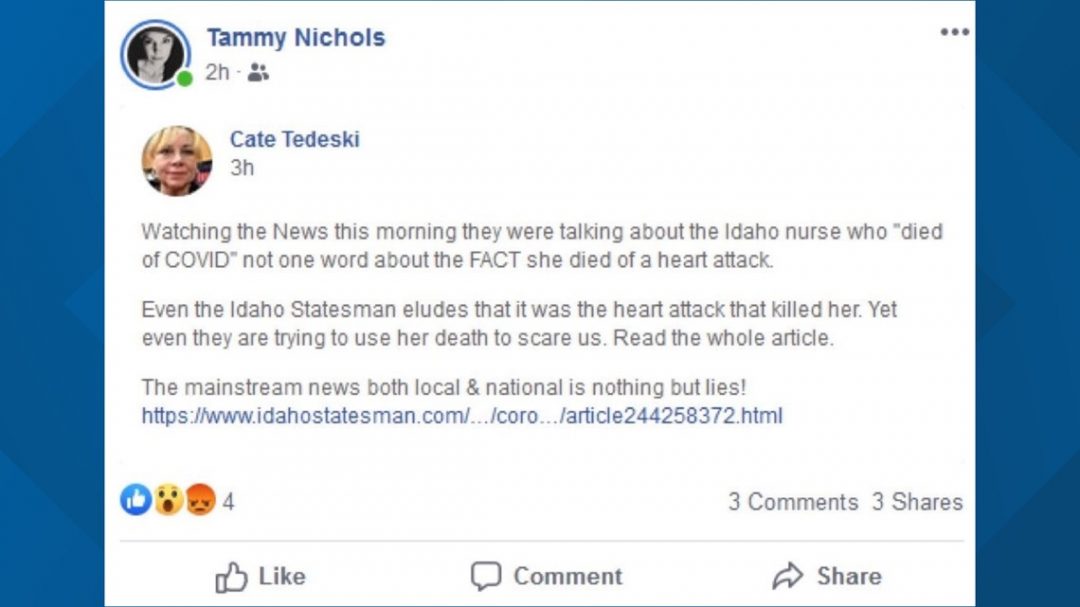 The individual making the post, Cate Tedeski, discusses how the nurse died of a heart attack and that the news did not mention that in their broadcast. It was a broadcast from KTVB that caused her to write the post.

We found the Idaho Statesman article she mentions and this is what it says about the nurse’s death:

But on July 13th, Hickey died at age 45 of a heart attack. Her death followed a brief but fatal infection by the Coronavirus.

However, Tedeski sent us the video of the broadcast from KTVB that she was watching, and that caused her frustration with the media reporting of the nurse’s death.

KTVB says the woman died of “complications” from the Coronavirus but there is no mention in the report about a heart attack.

It was Tedeski’s post about this issue, that Rep. Nichols shared, and Idaho’s media outlets have criticized her for.

Prior to responding to the media criticism, we asked Nichols why she shared the post in the first place.

Here is her response to us,

I get lots of information sent to me and I see lots of information about the Coronavirus. It’s my job to look at all the information and to educate myself on what is happening so I can respond to constituent’s questions accordingly. This post intrigued me because the Idaho Statesman alluded to the nurse dying of a heart attack and had the Coronavirus but the post from Tedeski was indicating that some media outlets were leaving out the part about the heart attack.

I shared the post on my personal profile where only myself and my friends could see it. It was not a public post or on my public page. I use Facebook posts in the same manner as Pinterest so it makes it easier to find the post later on, I have learned that many others do the same thing.

For those who are unaware, Pinterest is a website where people save (pin) information such as information, art, decorations, and other items that others can see and so the user can find the posts later on for their own use.

Our next question to Rep. Nichols was why she did not set the post to “Only Me” so that only she could see the post and no one else could.

I’ve never done that with any of my posts. Again, the post in question was about the woman’s frustration with the media over the reporting of the nurse’s death. Some media and some people who do not like me have made this out to be a much bigger issue than it ever needed to be.

Two of those outlets, KTVB and the Idaho Statesman both said Nichols shared a post calling the nurse’s death a “hoax” or implying that it was. However, the post from Tedeski never mentions the word “hoax” and Nichols makes no mention of the word “hoax” in her comments and denies that she has ever claimed the virus is not real.

Here are screenshots from part of their articles:

Based on the post by Tedeski, and taking into account the report from KTVB and the article from the Idaho Statesman, it appears that neither Nichols nor Tedesky were saying or implying that the woman’s death was a hoax and both denied to Idaho Dispatch that they believe it is.

We asked Tedeski if she believed the Coronavirus was a hoax and this was her response to Idaho Dispatch,

I don’t think Covid is a hoax, however, I strongly believe it’s being blown way out of proportion as to the severity of the virus & that the numbers don’t add up. I also believe the virus is being used to perpetuate another agenda.

In particular, the Idaho Statesman had asked Nichols for a response about criticism from St. Lukes personnel in a Tweet.

Nichols says she never responded to that question but the Idaho Statesman took a quote for another question and inserted it as an answer to one she does not answer.

Here is the email from the Idaho Statesman to Rep. Nichols:

Hi Rep. Nichols, Thank you so much for the quick response! Is that why you deleted the post? Can you expand on your comment about how she “died with covid as opposed from covid”? Also, do you have any response to the St. Luke’s people who have responded on Twitter? Here is a link to tweets from Dr. Pate, former president of the hospital, and another from Anita Kissée, a St. Luke’s spokesperson tweeting from her personal account. Thanks again, Hayley

And here is Nichols’ full response to the Idaho Statesman:

I did not delete the post, I am not sure what happened to it. Evidently, someone wanted to try to make an issue out of something, when the reality is that I posted it so that it was easy for me to find and look into later.

Nichols’ response does not appear to be an answer to all of the questions sent to her by the Idaho Statesman. It is not clear who or what the “someone” is that she is referring to.

However, the Idaho Statesman took Nichols’ quote about “someone wanted to make an issue out of something” and applied it as the answer to the tweets question. Nichols told Idaho Dispatch that the “someone” referred to in her response to the Idaho Statesman was an individual from her friend’s list on her private Facebook profile who screenshotted the post and put it on Twitter.

We asked Nichols if there was a follow-up question from the Idaho Statesman clarifying who she was referring to and she said no.

Rep. Nichols also said the Idaho Statesman left off another part of her quote in their article which clarified a question about a comment she made on her Facebook post. 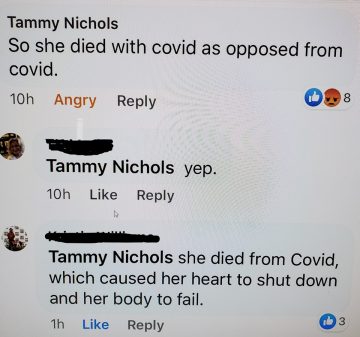 Nichols was asked by the Idaho Statesman about the comment and here is what she told them,

When the Idaho Statesman released their article, this is how they quoted Nichols, 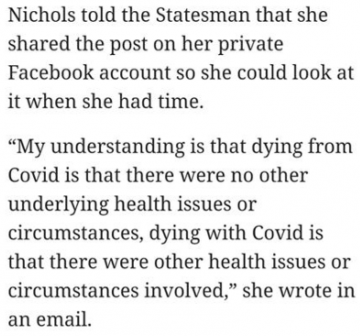 The Idaho Statesman left off the first part of Nichols’ quote which said she did not understand the woman’s circumstances and the desire to research the post more later on. They left off a portion of the quote that frustrated Nichols, but she said she was not surprised the media took the liberty to do so.

We asked Rep. Nichols if her Facebook comment was intended to imply that the nurse died with the Coronavirus instead of complications from the Coronavirus. Here was her response to us,

The comment was intended as a question which is why it started with the word “so.” I didn’t realize I had hit the period button instead of the question mark button. However, the other commenters understood that and answered my question.

Here is a screenshot of the quote in their article:

We reviewed the post by Rep. Nichols and the original post was set to “Friends” meaning it was only her friends on Facebook that could see the post. It was not set to public. Additionally, the post is still set to “Friends” which means that the post was never changed by Nichols.

Finally, we asked Rep. Nichols if there was anything she would like to say about the controversy.

She told Idaho Dispatch that Channel 6 had asked if there was anything she would like to say to the family of Samantha Hickey, St. Lukes, or the community but the article makes no mention of Nichols’ response to that question.

Here was the response she gave to Channel 6:

It is sad when any person dies, and I pass on my condolences to the family for their loss.

Nichols continued her statement to Idaho Dispatch by saying,

The whole incident is unfortunate, and it is dishartening that the media cannot stick with the facts or report acurate information.

Did she cross the line by sharing it? Did the media mislead and misquote Rep. Nichols’ response to their questions?

5 thoughts on “Did the Idaho Media Smear Rep. Tammy Nichols Over a Facebook Post About Nurse Practitioner’s Death?”