Several days ago the city of Rexburg held a meeting where they discussed a mask mandate.

Rexburg is already under a mask mandate from the East Idaho Public Health District. The ordinance the city was discussing several days ago was geared toward bringing more businesses in compliance with the mask mandates.

During the meeting, citizens were outside protesting the mask mandate proposal and were not allowed to come inside despite the cold weather.

In fact, a sign was placed on the door telling citizens that due to the 10-person limit of Governor Brad Little’s health order no one else could attend the meeting because the mayor, city council, and their staff reached that limit without citizens being present. 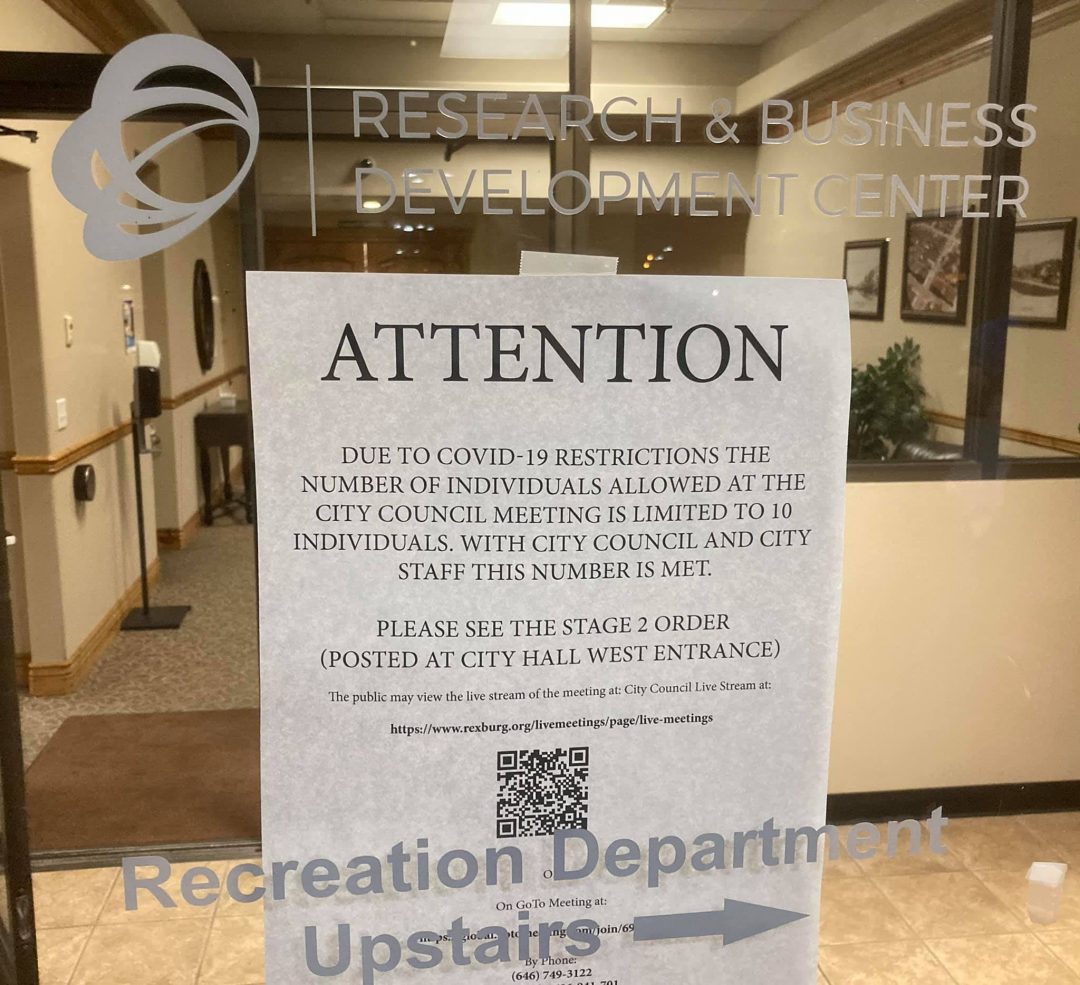 However, when Idaho Dispatch spoke with Representative Ron Nate (R-Rexburg) who was at the meeting that evening he told us that the sign didn’t make sense. Nate said that when the issue of urban renewal came up on the agenda, that a number of citizens who wanted to speak on that issue were let into the building to testify at the meeting.

Nate said that security let people in through a side door and not through the front door.

When the time came for the discussion on the mask mandate, no citizens appeared to be in the room as observers that Idaho Dispatch could see from the video feed. Nate said he did not see anyone go inside from the crowd either as others had been let in for the urban renewal issue.

Idaho Dispatch sent Mayor Jerry Merrill an email and asked him if he did let some citizens inside the building, despite the sign on the door, to testify on the urban renewal issue but then not let citizens in to observe or testify on the mask mandate issue.

Idaho Dispatch has not yet heard from Merill and if he responds we will update the article accordingly.

The ordinance was placed on the agenda 24 hours before the meeting started. It was recommended that the council skip the “readings” that normally take place, not take public comment, and then vote on the ordinance that night.

However, the meeting turned rather chaotic because the city did not appear to “mute” people who were part of the “GoToMeeting.” Frequent interruptions happened while the mayor and city council tried to discuss the mask mandate.

Additionally, at least one city council member appears to have been caught off guard that the item was even on the agenda.

Ultimately the mayor said they would take up the issue at a later date. No vote took place and the ordinance may come up again at a future date.

Do you think the mayor should have allowed more people in or was he simply trying to follow Governor Little’s health order? Let us know what you think in the comments below.