The question regarding Trump’s endorsement comes from a mailer sent out to citizens in Idaho’s 2nd Congressional District. The “American Dental Association” sent out the mailer according to the “Paid for” disclaimer.

Individuals who contacted Idaho Dispatch said that the endorsement didn’t make sense given Simpson’s criticisms of Trump after January 6.

A quote on the mailer states the following quote from Trump about Simpson,

Mike has my complete and total endorsement.

According to Simpson’s campaign website, he does list an endorsement from Trump. The quote in question is part of a full quote listed on the site.

However, Simpson also has an asterisk on the bottom of the quote stating that it was from 2020. 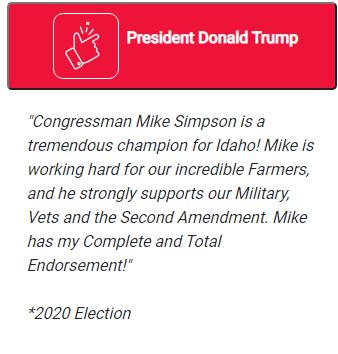 Trump has not made an endorsement in the 2nd Congressional District race at this time.