Idaho’s legislature only meets for approximately three months during any given year.

Idaho’s legislative session is set to begin on January 11th, 2021. However, some elected officials want a delay to the start of the session.

In fact, elected officials from both major political parties are asking for a delay.

Little has urged the Republican majority legislature to delay the 2021 session or go virtual according to IdahoEdNews.com.

In part, Stennett and Rubel believe that without proper COVID-19 protocols in place for the capitol and with the vaccine rolling out across the country, a delay would be beneficial. They are seeking a delay until April 5th of next year.

Here is the Democrats letter to Idaho Republican leadership in full (story continues below):

We, the House and Senate Minority Leaders of the Idaho Legislature, are writing to urge your ruspport for the postponement of hte upcoming legislative session unitl at least April 5, 2021, or until those Idahoans who so desire have had the opportunity to be vaccinated. Last Wednesday alone, more Americans died of COVID-19 than died on 9/11, D-Day, or in the bombing of Pearl Harbor, and hospitalization, infection and death rates are only climbing. In Idaho, our hospitals and intensive care units are at dangerous occupancy levels, and we are hurling toward the dreaded crisis standards of care where healthcare will for the first time in our lifetimes be rationed in Idaho. Under such extraordinary circumstances, the leaders of our state should be setting an example to reduce transmission, not exacerbate it. Proceeding with session in a few weeks, indoors, in-person, and with no masking or distancing requirements flies in the face of all public health guidance, sets the worst possible example for our citizens, and would likely contribute substantially to cummunity transmission at a time when our healthcare facilities can least afford to be inundated.

We are not aware of any other state that plans to move forward with legislative proceedings as if there is no pandemic-our sister states are either postponing, proceeding with virtual sessions, or at least requiring masks and distancing protocols. We urge you not to distinguish Idaho as the most reckless legislature in America. In respons to our previous requests, we have been told that Republican leadership will not consider the mask requirements or virtual/remote proceedings that some other states have chosen to implement. Accordingly, we ask that you postpone session for a reasonable period to allow for more widespread vaccination.

Vaccines are being shipped to Idaho as we write this letter, but will likely not be fully deployed and available until at least late March of 2021. Why subject legislators, their familyies, staff, journalists and the public to a highly dangerous enviornment when we can do all the necessary work a few months later at a vastly reduced risk once vaccines have been made widely available? The state’s business can be conducted more thoroughly and thoughtfully later, at a time when we are not racing to shorten proceedings due to unprecedented health threats. Postponing session would afford the people of Idaho a much more meaningful opportunity to have a voice in the proceedings of their government, many citizens want to attend hearings and testify in person, and could so safely in a few months. Let’s give them that opportunity, and not force the people of idaho to choose between their health and their civic voice.

We hope you will heed our request, and we stand at the ready to assist in any way we can.

In addition to the Democrat’s letter, an organization called “The Idaho Council on Development Disabilities” and 30 other groups signed another letter asking for a delay in the legislative session. However, these groups said they were also concerned about “uncontrolled angry mobs” who might be armed at the capitol.

The group cited incidents at the Idaho capitol during the “Extraordinary Session” as a reason for their concerns.

Despite the requests to delay from Little, Democrat leaders, and other groups, not everyone agrees that the legislative session should be delayed. The Idaho Freedom Foundation says they are adamantly opposed to delaying the session until later in the spring of next year.

Idaho Dispatch reached out to IFF’s Vice-President, Dustin Hurst, to ask what their organization thought of a possible delay. Hurst told Idaho Dispatch,

Not only does the Constitution require lawmakers to show up and do their jobs. Families and businesses are still struggling to cope with the so-called new normal. Lawmakers need to show up, provide education choice, and cut taxes.

Idaho Dispatch also reached out to Bedke and Winder to see if they are considering a delay in Idaho’s legislative session. Here is the response we received from Winder:

I do not think delaying the 2021 Legislative Session would be constitutional nor would it be in the best interest of the citizens of Idaho.  It is essential for the Idaho Legislature to immediately pass legislation related to balancing the authority of the Executive Branch with that of the Legislature during extended emergency declarations.

The Senate passed SR101 during the “special session” stating what a majority of Senators felt needs to happen during the coming 2021 Session.  We believe that the Executive Branch should not be able to extend emergency orders indefinitely by just renewing the 30-day order ongoing without the Legislature being called back for a special session to either concur with or reject the extension.  We believe a Constitutional Amendment needs to be proposed that would allow the Legislature to call itself back for a special session so we can have a say in how emergencies are managed by the Executive Branch.  We believe all workers should be considered essential, so no one loses their job.  We believe that the Legislature should be called back into session to appropriate emergency funds.

These are just a few of the pieces of legislation that we need to consider ASAP and not delay until later in the Spring or Summer of 2021.

We are required by the Idaho Constitution to consider and then to pass a balanced state budget before we Sine Die.  If we wait until April or May, we could be still facing requests for delays because of COVID-19 concerns.

If the Legislature has not passed a balanced budget and appropriated the funds there would be no funds available to meet the needs of our schools, of our public health programs or for public safety, just to mention a few problems.

Bedke responded with a statement released by the Idaho House Republican Caucus which you can see here: 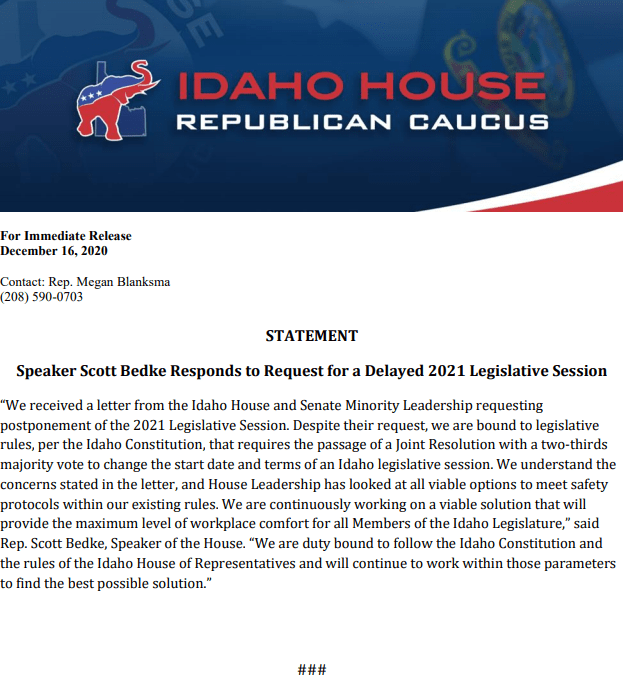 Do you think Idaho should delay its legislative session?

If not, do you believe that any protocols should be put in place such as a mask mandate or social distancing requirements at the capitol?