There were a number of issues that were debated and voted on. We want to give you a rundown of what took place legislatively.

As with day one, there were also some tense moments at the capitol between citizens, legislators, and police.

At the end of the day, Ammon Bundy and several other individuals were arrested for trespassing.

Before we report on the chaos that took place later in the day, we want to discuss several bills and resolutions that were debated on the House floor.

First, House Bill 1 would amend part of Idaho’s election statute to ensure that in-person voting can take place even if there is an “emergency” declared or not. The bill was introduced by Rep. Priscilla Giddings (Republican – District 7).

The bill passed with a vote of 67-0-3. The three represent the number of legislators who were absent and excused at the time the bill was voted on. No legislators voted against this bill.

There were a number of legislators who voiced concerns about mail-in only voting over the last few weeks and many of them wanted to ensure that voting in-person was an option for voters this November and in the future even during emergencies.

The second issue taken up by the Idaho House was House Concurrent Resolution 1 which would end Idaho’s “state of emergency.”

Quite a few legislators testified during the debate of this resolution which was put forward by Rep. Steven Harris (Republican – District 21).

Here is a video of Rep. Barbieri testifying on the House floor in favor of the resolution:

Several Republicans and Democrat legislators said that money from the federal government would go away if the emergency is ended. They opposed the resolution and wanted to preserve the current status for now. Rep. John Gannon (Democrat – District 17) discussed mask-wearing and how he felt there were more important issues the legislature should be taking up.

Here is a video of Rep. Gannon testifying on the House floor against the resolution:

One Representative, Scott Syme (Republican – District 11) debated against the resolution but was absent for the vote itself.  During his speech, Syme said that he didn’t believe they could constitutionally take this issue up and he didn’t want to deal with it any longer.

We reached out to Rep. Syme to ask why he did not vote on the actual resolution itself but we have not yet received a response.

When it was all said and done, the resolution passed with a vote of 48 in favor, 20 against, and two legislators absent. 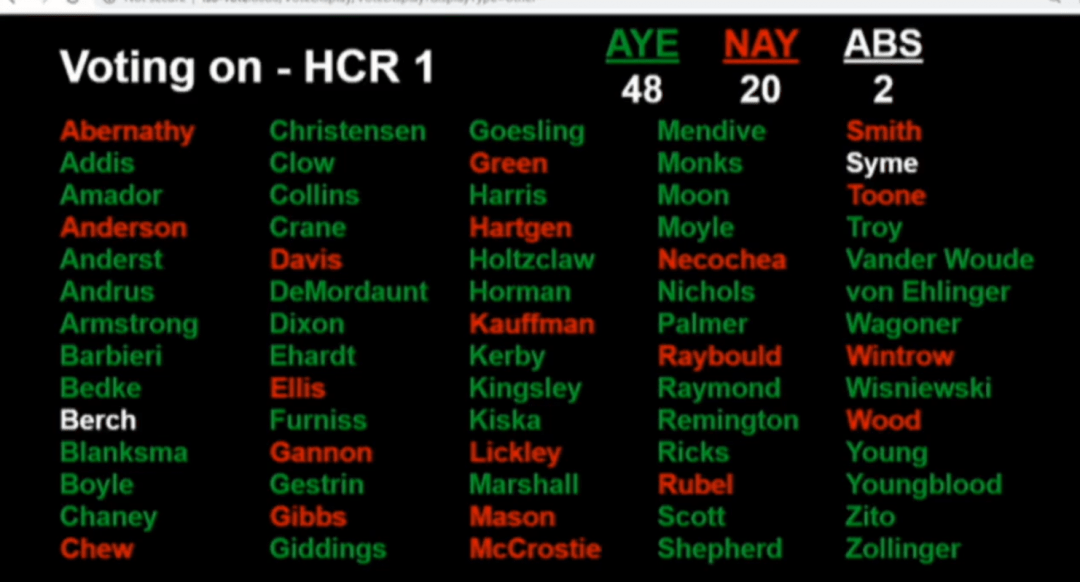 It remains to be seen what the Senate will do with the resolution. The Idaho Attorney General’s office has said they do not believe the resolution is binding and would be defeated in court.

While this resolution tells Governor Little that the emergency is over, the Senate is said to be working on a different concurrent resolution which would ask the governor to end the emergency.

The final issue taken up by the House on the floor yesterday was House Resolution 1, not to be confused with House Concurrent Resolution 1.

HR 1, proposed by Rep. Jason Monks (Republican – District 22), encourages the governor to do everything he can to ensure an adequate amount of poll workers are available for the election in November. This could include incentives for potential poll workers or even utilizing the Idaho Army National Guard to ensure enough help is on-site so voters can vote in-person.

This resolution passed on a vote of 68 in favor, one against, and one absent.

Because this is only a House Resolution, the measure will not go to the Senate but is simply a “message” to the governor on what the House would like to see him do.

The Idaho Senate has not voted on any bills or resolutions as of yet on the Senate floor. Their issues are all still being debated in the Senate committees.

The House Judiciary and Rules Committee is also still debating several bills regarding immunity protections and additional bills on this subject are still being introduced.

It was in the “Jud and Rules” committee hearing yesterday where more fireworks took place.

Soon after Chairman Greg Chaney (Republican – District 10) began the meeting, he looked over to the “press table” and told several individuals there that he had informed them they weren’t allowed in those seats.

He said that because he had already warned them not to be there, he was going to put the committee “at ease.” Chairman Chaney then told the two individuals he would have the Idaho State Police take care of the situation.

Idaho Dispatch was not in the room at the time but we were watching on Idaho’s Public Television feed and watched numerous live feeds from cell phone videos of the incident.

The two people who were at the “press table” were Miste Karlfeldt and Bryan Bowermaster.

Prior to Chaney shutting the meeting down, a video from Bowermaster can give some context to the situation leading up to his detainment.

Bowermaster’s Facebook video shows at about the 8:00 minute mark that he and Karlfeldt are being told by an officer they can’t be at the “press table.” Additionally, at the 22:00 minute mark, an individual with a blue nametag which represents “House Attache” appears to be explaining to Bowermaster what the requirements are for the press corps.

When Bowermaster goes to the front of the hearing room at about the 27-minute mark of the video, he converses with Rep. Chaney for several minutes. Because of Chairman Chaney’s distance and mask, it is unclear what he is saying to Bowermaster. Bowermaster tries to ask Rep. Chaney several questions but Chaney walks away from the conversation.

When the meeting began, Bowermaster and Karlfeldt were both sitting in the seating area for spectators.

At about the 40:15 mark of the video Bowermaster says,

Neither Bowermaster nor Karlfeldt are part of the CCA.

Karlfeldt was representing Range Broadcasting Network as a citizen journalist but RBN is not a credentialled news outlet by the CCA. We asked Bowermaster if he was part of any independent outlet or if he was just doing his own citizen journalism and we have not yet received a response to the inquiry.

We asked both Bowermaster and Karlfeldt for a statement on the incident in the Jud and Rules hearing yesterday.

Freedom of the press is an important constitutional right. We must keep our press free in order to bring transparency to our government. As a citizen journalist with Range Broadcasting Network, my goal is to bring the citizens the real news as it is happening. I hope that today’s experience has brought to light the issue with only having mainstream media able to have a pass to front-row seats at our capitol. Are they bringing the people the real news? I don’t think so. The citizens are becoming citizen journalists out of necessity and we need to make sure they have equal access to those front-row seats.

We asked Bowermaster if he had a statement he wished to make and this is what he sent Idaho Dispatch,

When our elected officials refuse to give proper and cordial education about a process that we all have the right to, such as journalism and freedom of the press, in our publicly owned capitol building there is a problem. In a public venue like this, if an elected official refuses to give proper process and the right of way to the people, what are the people to do, but to exercise their right? The issue with Chairman Cheney’s negligence yesterday is exactly why I deemed it necessary to exercise my rights further, by sitting at the press table to enforce the proper balance of authority and service from the chairman and Sergeant at Arms. Because he chose to quietly dismiss my request for proper process and education prior to this, my actions also allowed the audience to witness his refusal to properly offer a balance of service and authority.

In particular, we asked Chaney why these individuals were allowed at the press table the day before but were not allowed to be there today. We also asked him if he informed them of the rules and what they needed to do in order to be properly credentialled. Finally, we asked Chairman Chaney if he had any quote he would like to have added to our article.

At the time of this writing, we have not received a response from Chaney but will update the article if he responds.

Right after Chaney put the committee at ease, Idaho State Patrol officers came into the room.

Karlfeldt gets up from her seat and she leaves the room. Several ISP officers grabbed Bowermaster and swiftly escorted him out.

Bowermaster did tell us that he was not arrested but that they are charging him with trespassing.

As Bowermaster is escorted from the room, chaos erupts with a lot of screaming and chanting. This is when Ammon Bundy sits at the press table.

The meeting is eventually moved to a different room but Bundy and a number of others remained in the Lincoln Auditorium where the meeting was supposed to take place.

Later on in the day, according to witnesses on the ground, a man enters the room with numerous ISP officers and tells them that the Speaker of the House has ordered the room to be cleared.

From what we know, the legislators had convened for the day and were no longer working.

Most of the people in the room got up and left when ordered to leave.

We do not yet know why Bundy refused to leave the room or the chair he was sitting in at the time. Bundy was zip-tied to the chair by ISP and wheeled outside and eventually loaded into a police car. 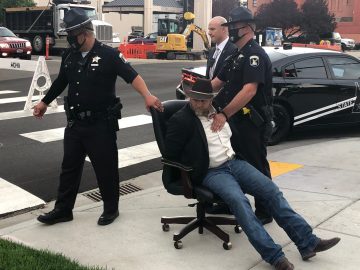 We reached out to Bundy for a comment but he was in jail at the time we requested a response.

Bundy has now been released from jail. While he has not yet given a statement himself that we know of, there was a post on Bundy’s page “People’s Rights” with the following statement:

In addition to Bundy, other individuals were also arrested for trespassing, and according to this statement, they have also been released.

Today is supposed to be the final day of the Idaho extraordinary session. So far, no bills or concurrent resolutions have made it through both chambers.

Will this really be the final day of the session or will it go later into the week?

Are there going to be more fireworks?

Let us know what you think of the session so far in the comments below.

UPDATE: We are including a statement from House Speaker Scott Bedke on the last two days. 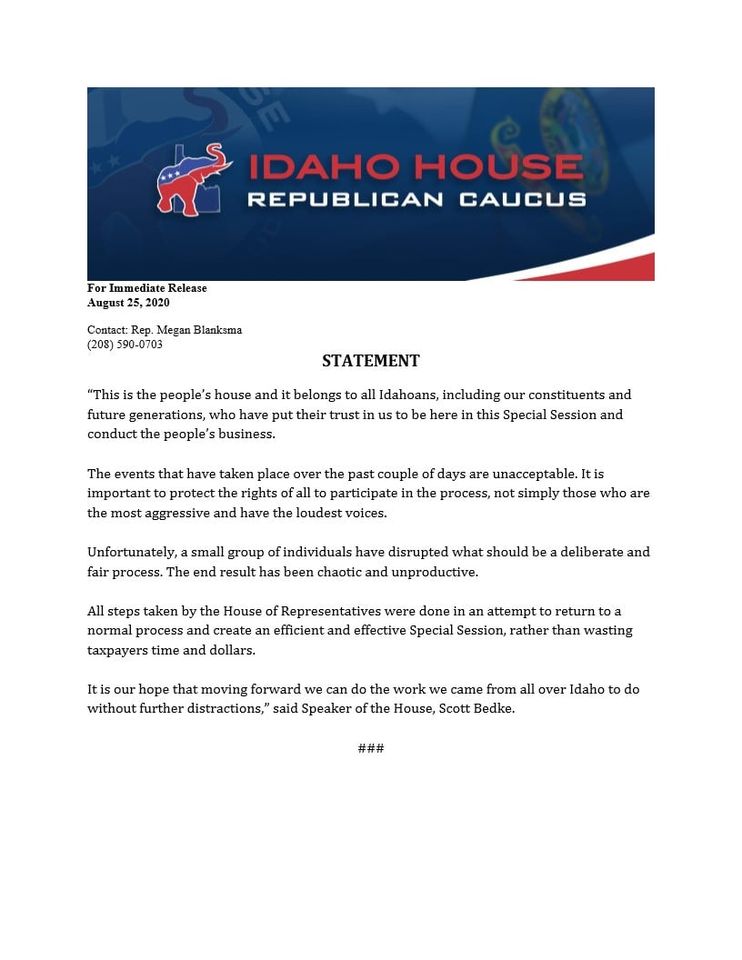