An infrastructure bill passed through the U.S. Senate with both Republican and Democrat support including both of Idaho’s Republican U.S. Senators.

Idaho Dispatch reached out to both Risch and Crapo’s offices for comment and reaction to the feedback and opposition to their vote. Both Senator’s had staff respond to Idaho Dispatch’s inquiry.

Today, the Senate passed the infrastructure bill for America’s roads and bridges. Senators had two choices: this $550 billion package with no tax increases, or allow Democrats to pass the Biden proposal of $2.5 trillion, raise taxes, and pile it on top of their impending $3.5 trillion social spending spree. On behalf of Idaho, I chose to support the lower $550 billion investment in hard infrastructure like roads, bridges, and broadband. I believe it to be the substantially more reasonable and conservative solution to the necessary infrastructure spending. I intend to vigorously oppose Democrats’ reckless $3.5 trillion social spending bill, which is coming next.

Here is that link.

The comments on our Facebook page were mostly negative toward both Senator Jim Risch (R) and Senator Mike Crapo voting for the bill. At the time of this writing, we could not find a comment on our Facebook thread that supported their decision.

Here is a screenshot of some of the comments we received: 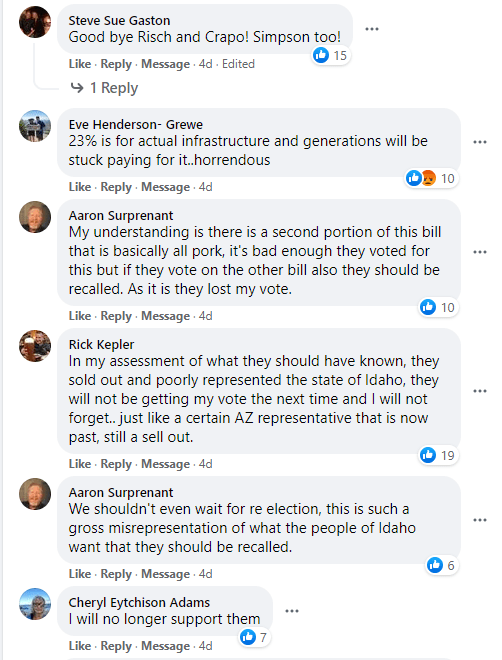 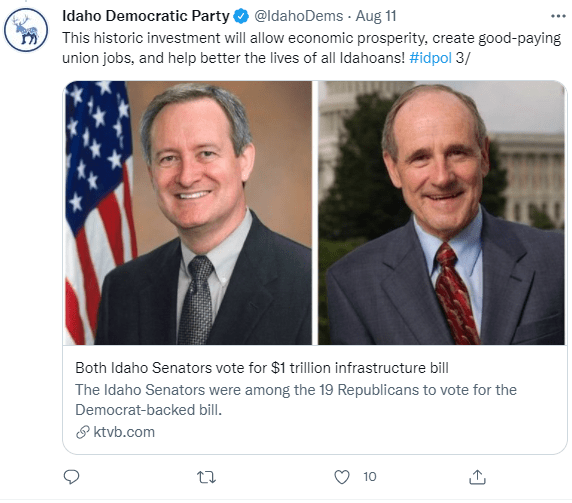 Here are some of the comments from the Idaho Democrat Party’s Facebook post of the same article: 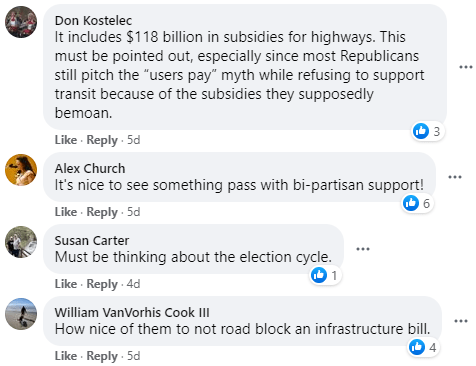 What do you think of the vote for the infrastructure bill by Crapo.Risch? Do you agree with the vote or not?