Update: The Ada County Democrats have responded to our inquiry and the article has been updated accordingly.

Not long ago the city of Star became the first city in Idaho to pass a 2nd Amendment sanctuary resolution.

The passage of resolutions and ordinances to support the 2nd Amendment has been increasing over the last couple of years across the country. Much of the movement started after gun control became a big issue in the state of Virginia which recently came under Democrat control.

Idaho is already considered a “2nd Amendment Sanctuary State” by some due to a law that was passed here in 2014. However, some cities are still pushing resolutions to let their citizens know where they stand on the 2nd Amendment.

The city of Eagle is now considering its own resolution tonight at their city council meeting.

…the citizens of Eagle are opposed to any legislation considered by the Idaho State Legislature or the United States Congress that would infringe upon the right to keep and bear arms and would ban the possession and use of any firearms, magazines, ammunition, or accessories now employed by individual citizens of Eagle…

Currently, Senator Grow is the only one to respond and he told Idaho Dispatch,

Erik Berg, Chairman of the Ada County Democrats sent a statement to Idaho Dispatch about the Eagle resolution.

In my capacity as chair, I’d just say that it will be the courts that functionally decide which laws are unconstitutional or not. Municipal government isn’t given that right constitutionally either by the state or federally. In reflection of that, I take this as a messaging document more than law (which it being a resolution shows). I concern myself more so with ordinances, laws, code, etc that make the greatest tangible and concrete difference for individuals in all our communities including Star. In these times where so many in our community face immense challenges, I think our energy is best spent on concrete ways to make things better for people.

If any of the other individuals/organizations we reached out to respond we will update the article accordingly.

For citizens wishing to express their support or opposition to the resolution, you can reach out to the city council using the form here:

If you wish to reach out to the mayor you can do so using the link here:

What do you think of 2nd Amendment Sanctuary Resolutions? Are they good or are they not something a city council should be focusing on?

Here is the full resolution being considered in Eagle: 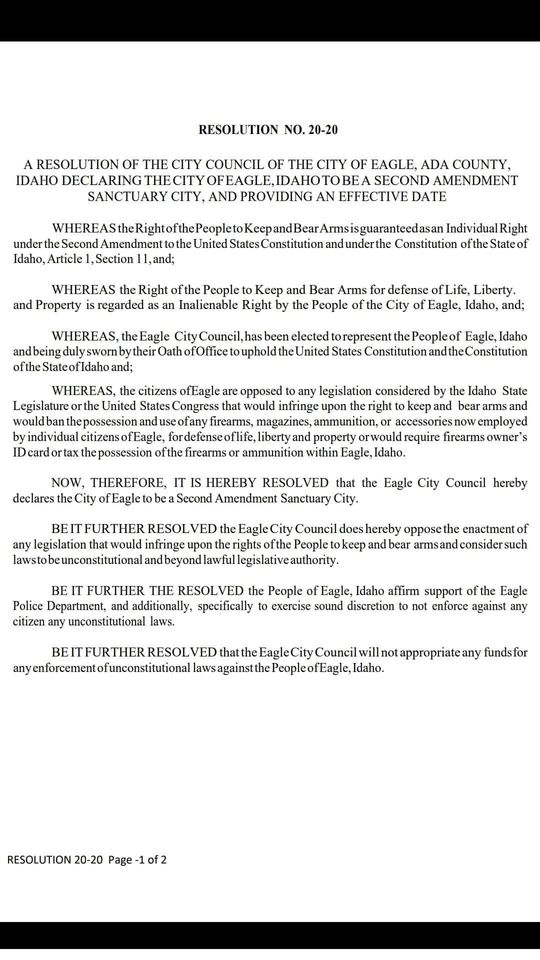