The Boise Pride Fest has responded to Idaho GOP Chairwoman Dorothy Moon’s statement regarding the Drag Kids event. Here is their statement (story continues below): 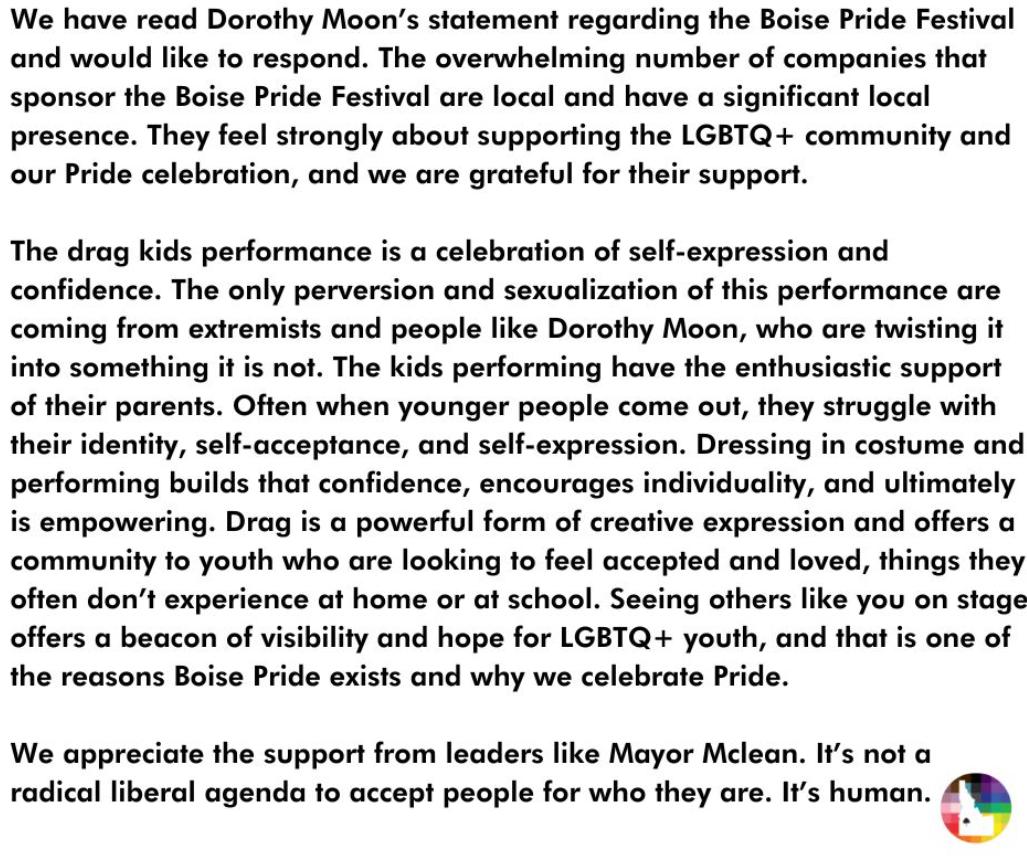 The Boise Pride Fest is facing criticism over a planned “Drag Kids” performance this Sunday.

Criticism over the Drag Kids event has been covered by some national media outlets. Both Breitbart and Daily Caller have written about the event this weekend.

This is the 33rd year of the Boise Pride Festival. The event takes place from September 9th through the 11th.

According to the group’s website, the event is described as follows,

Boise Pride brings together members of the lesbian, gay, bisexual, and transgender community, their friends, allies, and supporters in celebration of the unique spirit and culture of the LGBTQ+ community.

The Drag Kids performance will follow the “Fred Meyer Pride Parade” that begins at 10:00 A.M.

Zion’s Bank was a sponsor of the event and has since pulled its sponsorship, citing concerns over “activities involving children..” Zion’s full statement states,

Over the years, Zions Bank has supported a variety of Pride events because they are an important part of our support for our LGBTQ employees and allies and are representative of our efforts to foster an inclusive, diverse and equitable workplace and community. This support for all our employees and communities remains unchanged. However, when we committed to our sponsorship of this year’s Boise Pride event, we were unaware of the event’s activities involving children/minors. Since learning of these specific activities, we have made the decision to withdraw our participation in this year’s Boise Pride event and have communicated this to the event organizers.

However, not everyone opposes kids being a part of these activities this weekend. For instance, Boise Mayor Lauren McLean had this to say about children being involved in the events;

I applaud the organizers who have planned a weekend full of positive, inclusive events for all ages. We must show our kids and teens that they have a home here, that we welcome them, accept, and support them for who they are, as they are.

In addition to those speaking out online against the event, at least one protest is planned ahead of the Boise Pride Festival.  Another two protests are planned for Friday and Sunday.

The following images are circulating on social media regarding the protests. 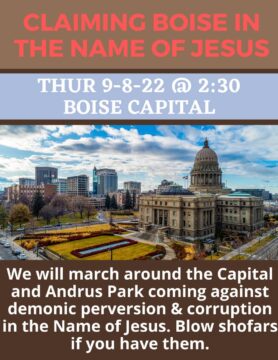 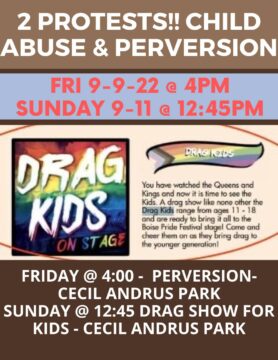 Idaho GOP Chairwoman Dorothy Moon also released a statement regarding the event, and in particular, the participation of kids in the event. Here is her full statement:

Boise Mayor McLean campaigned as a moderate, but she has governed like her radical colleagues in Seattle and Portland. It’s no wonder that she’s now put Boise in the middle of a national firestorm over the sexualization of children. To be clear, this is no sleight-of-hand or political wordsmithing: Idaho’s Democrat party believes it is not only okay but laudable to encourage children to engage in public displays of sexuality. For those who have been following the radicalization of the Democrat party, this should come as no surprise.

What is surprising is to see who is financing this attack on Idaho’s children. Out-of-state companies promise to bring investment and jobs to Idaho. Instead, they are financing the sexualization of our children and the perverse idea that children should engage in sexual performances with adult entertainers. I call on all concerned Idahoans-and the lobbying groups that represent many of these out-of-state businesses who seek tax benefits and subsidies from our legislators, including IACI-to disavow this attack on Idaho’s children and to invest their sponsorship dollars in the Boise Rescue Mission that serves families, women fleeing abuse, and disadvantaged children. Children should be given the chance to live out a childhood free from violence, hunger, and the sexual appetites of adults.

The Boise Police Department and Idaho State Police will have officers throughout the events for security. Additionally, The Boise Pride Festival will also provide its own security for the events.

Idaho Dispatch reached out to The Boise Pride Festival to ask for a comment on the criticism of the Drag Kids event. We have not received a response at the time of this writing.