Since the time of George Floyd’s death, there has been a lot of protests across the country against the police.

Even here in Idaho, we have seen several protests against police funding. The city of Boise in particular has had several Black Lives Matter protests.

In addition to the Black Lives Matter – Boise protests have been large counter-protests.

Many of the counter-protesters either want police funding to continue or had concerns about Black Lives Matter and potential violence from the organization.

However, despite the BLM protests, the Boise City Council has approved the latest budget which includes increased funding for the Boise Police Department.

In fact, the department will receive an extra $1.2 million from what it received for this year’s budget.

While the council meeting was taking place on Tuesday, another BLM protest took place at Ann Morrison Park even though the police had set up barriers at city hall.

The Boise chapter of BLM says that they could not enter city hall to deliver petitions they had gathered because of the barriers. Boise Police say that even with barriers in place, there was a path for citizens to get in the building.

The city council meeting which took place on the 18th was the third and final reading of the budget. Typically speaking, budgets and ordinances are ready at three separate meetings before they are voted on.

In this case, the Boise City Council approved the budget on a 4-2 vote.

City councilmembers who voted in favor of the budget were TJ Thomson, Holli Woodings, Elaine Clegg, and Patrick Bageant.

Those councilmembers voting against the budget were Jimmy Hallyburton and Lisa Sanchez. The mayor only serves as a tie-breaking vote and therefore Mayor Lauren McLean did not vote on the budget itself but it was her proposed budget that the council voted on. 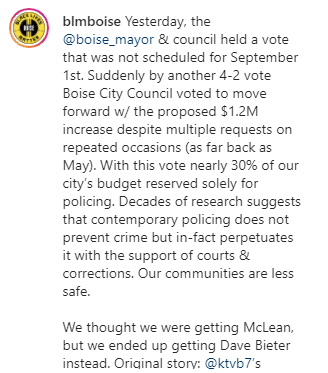 Mayor McLean is already facing a recall from citizens who are not happy with her policies and feel that they were deceived by her.

Now it appears that Black Lives Matter also wants Mayor McLean out of office but for different reasons than the group who is trying to recall her.

Additionally, the group previously posted about other city councilmembers that are up for re-election next year. The presumption is that the group intends to try and oust several of the members.

Do you support Boise approving an increase to the police budget or do you think it should have been decreased?

Be sure to let us know in the comments below!