On Saturday, Black Lives Matter – Boise held a vigil at the Idaho capitol for Breonna Taylor who was killed by police one year ago.

Approximately 100 people showed up for the event in support of Black Lives Matter. Additionally, approximately 30-40 counter-protesters were at the event, many of them from the group Idaho Liberty Dogs.

Idaho Dispatch also covered the event live, in its entirety, which you can watch here:

The following report is what Idaho Dispatch personally witnessed and is not necessarily a report on everything that happened at the event.

Idaho Dispatch arrived at the capitol approximately 20 minutes before the event began. We noticed that there were some counter-protesters from the Idaho Liberty Dogs at Cecil Andrus Park across the street as well as several law enforcement officials.

Several people spoke at the event with most of the speeches centering around police reform, police brutality, and BLM – Boise increasing their activity and presence in the coming months. 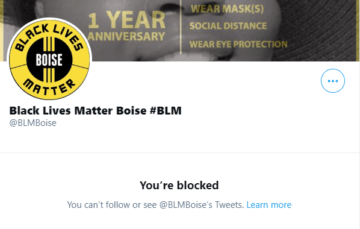 One of the speakers, Destiny, read a list of names of individuals she said were killed by law enforcement in Idaho. The total amount of names was 149 from Idaho plus Destiny read Breonna Taylor’s name.

Idaho Dispatch asked Destiny and the main speaker at the event where the list of names came from and how far back the names come from.

The response Idaho Dispatch received was that the names come from the year 2000 until now.  We were informed that there were no parameters set on what names were included but that it was the list of individuals who had been killed by law enforcement in Idaho and that some of the names had been “withheld” and were obtained through a public records request.

The vigil and counter-protest were much smaller in numbers compared to what took place in June of 2020 from what we observed.

During the opening of the event, some counter-protesters heckled the BLM – Boise speaker, and the heckling continued for much of the event.

Unlike previous events, Idaho Dispatch did not witness any physical altercations taking place. There were several moments where ISP did intervene in arguments that were getting heated but we are unaware of any arrests being made at the event from either side.

Idaho Dispatch did wait until after the event to observe whether or not anything would occur after. We did not personally witness anyone being targeted after the event was over from either side but that is only our own personal observations.

Idaho Dispatch is happy to continue our coverage of political events in Idaho and we want to thank all those who tuned in during our live broadcast.