HB 154 passed out of the House Transportation Committee last week with a “do pass” recommendation.

Under HB 154, counties would be able to opt-out of vehicle emissions testing under specific conditions and with the approval of county commissioners.

The bill is being sponsored by Rep. Ben Adams (R-Nampa) and has 20 cosponsors. Adams himself lives in Canyon County which has mandatory vehicle emissions testing.

The bill’s official Statement of Purpose is as follows:

This legislation amends the current code to provide that certain counties may opt out of vehicle and maintenance programs under specified conditions.

HB 154 passed the Idaho House on a vote of 51-17 with four Republicans joining Democrats in opposing the measure.

Adams opened debate on the House Floor and said,

I will start by stating that the passage of this bill, as the Director from the Department of Environmental Quality stated, does not end the emissions testing and it does not put us out of compliance.

Adams went on to say about the bill and about Canyon County specifically,

This program caused an unnecessary burden on every driver in Canyon County, but especially affected those who fall into the lowest income bracket. All too often the unfortunate scenario played out where a citizen would have to decide between paying his rent, buying food, or other expenses, or paying to fix his vehicle. Often a fix unrelated to the actual emissions of the vehicle to avoid having their registration revoked.

HB 154, Adams said, would allow county commissioners to vote their respective counties out of emissions testing once their air quality standards have been met. Adams said that the current testing program in Canyon County is an unnecessary tax on its citizens.

In closing, Adams asked that other legislators who live in counties where emissions testing is not currently being implemented, keep their citizens in mind and think about how they would feel about emissions requirements if their citizens had to pay to have the testing done.

No other legislators debated in favor of or against HB 154.

Rep. Mike Moyle (R-Star) declared a Rule 80, as did Adams, which typically indicates a conflict of interest. Speaker Scott Bedke (R-Oakley) joked that Moyle has had several vehicles fail the emissions test and noted his Rule 80 declaration. Moyle also lives in Canyon County and is one of HB 154’s co-sponsors.

HB 154 now heads to the Senate Transportation Committee for consideration.

Here is a list of those who voted for and against the measure: 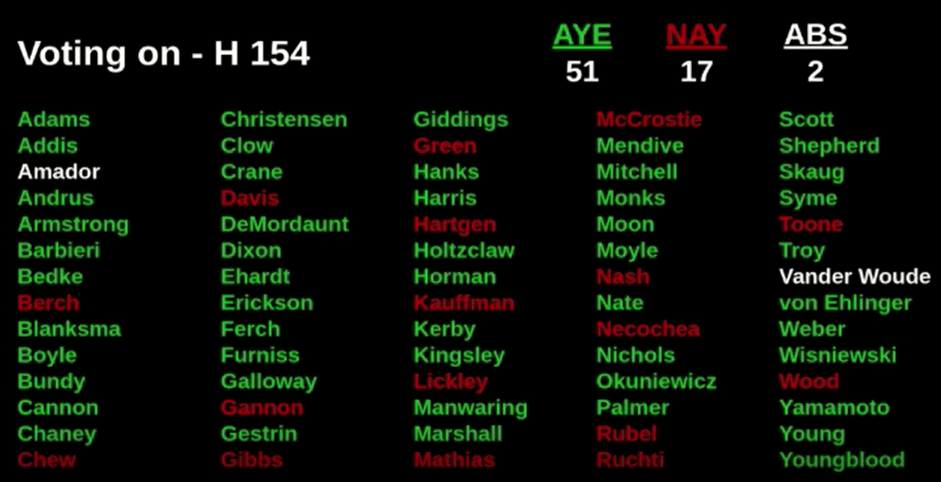