HB 122 would allow teachers with an Enhanced Concealed Carry Permit to carry their firearms while on school grounds.

Local law enforcement will also be notified of which teachers might be carrying and will be given a picture of the teachers who choose to carry.

The Idaho Sheriff’s Association and the Idaho Chief’s of Police Association oppose the measure. Everytown for Gun Safety also opposes the bill.

After a lengthy debate on the House Floor, HB 122 passed despite six Republicans defecting and joining all Democrats in opposing the measure.

HB 122 is being sponsored by Rep. Chad Christensen (R-Iona), who said during the opening of the debate,

I know in the past this has been an issue about local control or an arguement that people have brought up to me about it. I don’t like any government restricting your constitutional protections. This is a 2nd Amendment issue and for me, the 2nd Amendment right doesn’t stop at the door of a school.

Christensen also mentioned during his opening that one of his sheriffs, Adam Mabey, is supportive of the bill. Mabey testified in the House State Affairs Committee that he supported HB 122. Christensen said that his main goal was to protect kids from potential killers.

Rep. Chris Mathias (D-Boise) opposed the measure and said during the debate,

Only one other Representative debated against the bill on the House Floor, Rep. Marc Gibbs (R-Grace).

Here is a screenshot of the votes with “Red” votes being Representatives voting against the bill and “Green” votes being in favor of the bill. 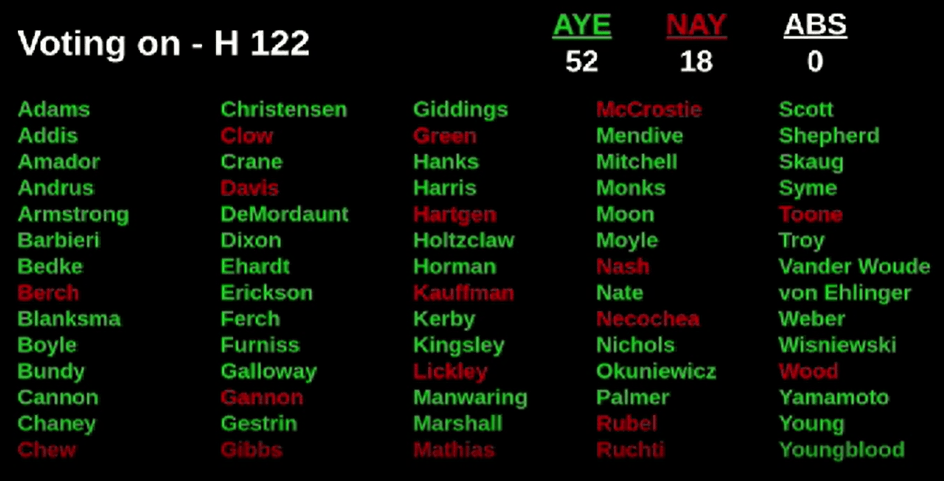 Do you believe teachers should be allowed to carry firearms in schools? Why or why not?

Let us know in the comments below