Senate Bill 1110, a bill that would change the ballot initiative requirements in Idaho is on the desk of Governor Brad Little.

The Governor’s office has given no indication on whether or not he will sign the legislation. Little previously vetoed a change to the ballot initiative process back in 2019.

At that time, Little had concerns over whether the measure would hold up constitutionally.

One of the primary groups fighting against SB 1110 is Reclaim Idaho. The group has been pushing to kill the measure at each step of the legislative process.

Reclaim Idaho has been pushing citizens on social media to call Little’s office to veto the bill. Here is a screenshot of one of their recent Facebook posts: 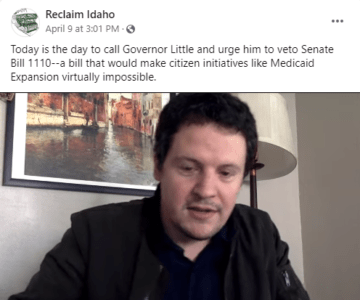 Sen. Steve Vick (R-Dalton Gardens) is the sponsor of the bill and says that the reason for the change is to ensure that rural voters have a voice in the initiative process as the urban areas of Idaho continue to grow.

The purpose of this legislation is to increase voter involvement and inclusivity in the voter initiative/referendum process. This will be accomplished by ensuring signatures are gathered from each of the 35 legislative districts, so every part of Idaho is included in this process.

Legislators who have spoken in favor of the measure say it will help protect rural interests and give rural voters an equal say in the process.

Legislators who spoke against SB 1110 say that it will make the initiative process nearly impossible and give one legislative district “veto power” over a potential intiative.

Little now has three options to choose from with SB 1110: He can sign the bill and make it law. He can veto the bill and force the legislature to try and override his veto. Finally, Little can neither sign or veto the bill in which case it becomes law after the deadline for him to take action has passed.

What do you believe Little should do with SB 1110? Let us know in the comments below.