Another controversy has arisen from the recent Black Lives Matter – Boise protest that took place on June 30th.

First, controversy arose when the Boise police union and the local Fraternal Order of Police lodge disagreed with Mayor McLean’s assessment that all of the violence came from the counter-protesters. Law enforcement made it clear that people from both sides of the protest were being investigated.

Now, Council Member Lisa Sanchez has made a statement about the protest that has angered a number of individuals and groups.

In a comment on Facebook, Sanchez claims that open carry is a way for white supremacists to intimidate people of color.

Sanchez is referring to the hundreds of gun owners who were counter-protesting the “Defund the Police” event and many of them were open carrying firearms. Some citizens carried rifles and others carried handguns.

The comment did not sit well with many gun owners, including members of the Idaho Second Amendment Alliance.

Every person in America who is not prohibited, no matter their race, can openly carry firearms in Idaho. There are people of every race in Idaho who open carry firearms on a daily basis. Council Member Sanchez’s comments are absurd and the recent open carrying of firearms in Georgia should put to rest any notion that it is racist to do so. She should apologize to all Idahoans for her comment.

Rosquist is referring to a group of black Americans who were in Georgia and openly carried both rifles and sidearms. 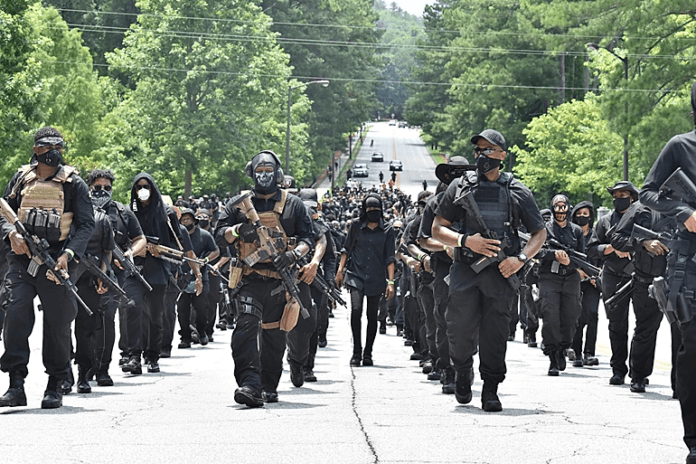 The group calls itself a “black power militia” where no white people are allowed to join.

The Idaho Second Amendment Alliance weren’t the only ones who spoke out against Council Member Sanchez’s comment. Rep. Chad Christensen also condemned her statement.

Christensen, who sponsored a bill earlier this year that would have let school teachers carry a firearm to protect students told Idaho Dispatch,

Boise City Council Member Lisa Sanchez is undeniably a racist. I personally open carry a firearm, at times. She must claim to have telepathic skills to know my intent. I carry to protect every innocent person around me, this includes anyone of any ethnicity. The fact that she singles out “white people” is indeed racism and it is absolutely repugnant. I have good friends, who are not of Caucasian descent, who open carry. What is her ridiculous rationalization for those scenarios?

Boise City Councilwoman Lisa Sanchez has inexplicably chosen to escalate racial rhetoric and tensions in the community she “serves” by suggesting: “Open Carry is a legal way for white supremacists to intimidate the rest of us.” The Ada County Republican Party denounces this type of language. It is a racially-charged statement attacking our Constitutional guarantees of the Second Amendment, and it is inconsistent with Idaho’s Constitutional Carry law that recently came into effect.

Additionally, councilwoman Sanchez recently signed a letter by saying: “Brown woman who chose not to have children for fear of their abuse and murder by white people.” This statement is divisive and sadly just ignorant, especially for a public officer. The Preamble of the Idaho Republican Party Platform states: “We believe in equal rights, equal justice and equal opportunity for all, regardless of race, creed, sex, age or disability.” Does Councilwoman Sanchez believe in this too? We call upon City Councilwoman Lisa Sanchez to immediately retract her statements and lead in a way that can unify our Capital City and justify the trust citizens of Boise placed in her. Her racist language is not welcome here.

Idahoans have just celebrated our Nation’s birthday and our shared love of Faith, Family and Freedom. Each year Republicans recommit to those historic and Divinely inspired words “We hold these truths to be self-evident, that all men are created equal, that they are endowed by their Creator with certain unalienable Rights, that among these are Life, Liberty and the pursuit of Happiness.” We stand on those words and those of our Constitution. Boise’s City Council should as well.

We sent Council Member Sanchez a message on Facebook asking her if she wanted to respond to the Ada County Republican statement.

Sanchez has not yet responded to our inquiry. We will update the article if she does.

Let us know in the comments what you think about Sanchez’s comments on the open carry of firearms being a legal means for white people to intimidate people of color.